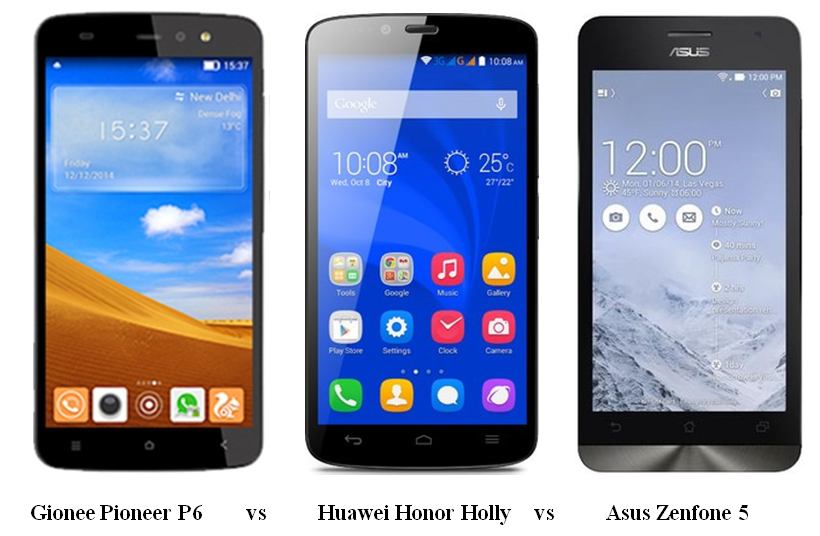 The Gionee Pioneer P6 and Huawei Honor Holly are powered by Quad-Core MediaTek processors clocked at 1.3 GHz, both devices are further coupled with 1 GB of RAM and Mali 400 GPU while the Asus Zenfone 5 is backed up by Dual-Core 1.6 GHz CPU, Intel Atom chipset paired with 2 GB of RAM which enables quick and hassle free multi-tasking. The Zenfone 5 further equips PowerVR GPU.

Huawei Holly and Zenfone 5 sport an 8 mega pixel auto focus rear camera with Flash. Gionee P6 on the other hand, is equipped with a 5 mega pixel rear camera. These devices again have a tie with 2 mega pixel front facing camera, but Gionee Pioneer P6 flaunts its 2 mega pixel secondary camera with flash which is usually not seen in much devices in the Indian market.

Zenfone 5 houses the most powerful battery of 2110 mAh, followed by Honor Holly with 2000 mAh battery while Pioneer P6 is fueled by a 1950 mAh battery which is rated to deliver up to 108 hours of standby time and up to 9.5 hours of talk time on 3G network.

With Rs. 6,999 price tag, the Honor Holly is priced the lowest of all the three smartphones. Gionee P6 is priced at Rs. 8,890 while Asus Zenfone 5 comes with a price tag of Rs. 8,999. Clearly Zenfone 5 and Pioneer P6 are priced nearly the same while Honor Holly comes at a much lower price as compared to the former two smartphones.

Priced at Rs. 8,890, Gionee Pioneer P6 comes packed with plethora of impressive features. It sports 2 mega pixel secondary camera with flash which is the highlight of this device, yet it will face fierce competition from the other two devices. Honor Holly and Zenfone 5 on the other hand, feature some similar specifications, which makes price of these devices as the deciding parameter in this comparison. Honor Holly boasts of a lower price tag of Rs. 6,999 while Zenfone 5 is priced at Rs. 8,999. Furthermore, Zenfone 5 and Honor Holly come with a better display resolution, better rear camera and slightly more powerful battery as compared to Gionee Pioneer P6. Yet the attractive price of Huawei Honor Holly adds icing on the cake and gives it competitive edge over other two smartphones.