Huawei’s Honor brand has launched its Honor 5X smartphone in China. This feature rich smartphone will compete with the Xiaomi Redmi Note 3 phone which was launched in China in November 2015. Both smartphones share some features in common such as metal body and fingerprint sensor among others.

What else do they have in common? Are there any differences between them? You will get answers to all these questions in this post. Read on to find out how Honor 5X vs Xiaomi Redmi Note 3 compare with each other in terms of specifications, features and price. 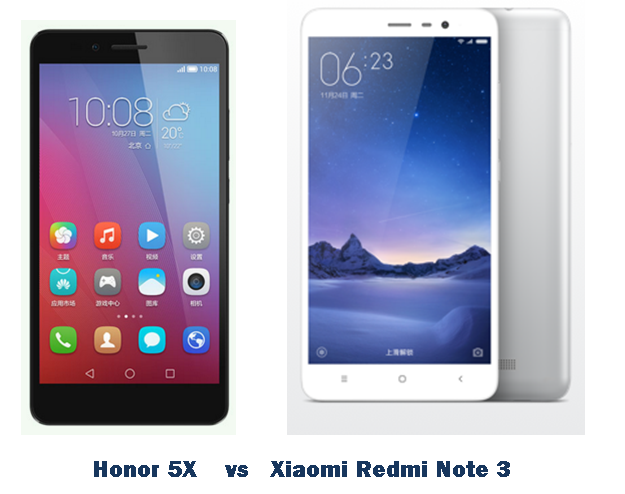 Both smartphones run Android Lollipop operating system wrapped under their respective UI’s. The Honor 5X is based on EMUI 3.1 whereas the Redmi Note 3 is wrapped under MIUI 7 skin.

This round is a tie. Both phones flaunt a 5.5-inch full HD display with resolution of 1920×1080 pixels resolution.

This department is again a tie. There is a 13 mega pixel rear camera with dual LED flash on both devices and a 5 mega pixel front facing camera.

One of the highlights of both phones is that they boast of metal body and feature a fingerprint scanner for additional security.

There is a very close competition between the two smartphones. Redmi Note 3 is fueled by a larger battery but it lacks microSD card support. If you don’t need much storage space on your phone and are looking for a phone with good battery backup, then 32GB variant or even 16GB variant of Redmi Note 3 is the right device for you. If you can’t manage without much storage space, then you should go for Honor 5X.

Which phone- Honor 5X vs Xiaomi Redmi Note 3 would you prefer to buy? Share your views with us in the comments section below!