Honor Magic 2 was revealed ahead of the IFA Berlin. It is being touted as one of the most innovative phones from the brand with minimal screen-to-body ratio till date. Now, Honor has started teasing the upcoming device. Latest teasers show the manual camera slider of the handset along with other design features. Read more to find about Honor Magic 2 Price in India, Specifications, and Features 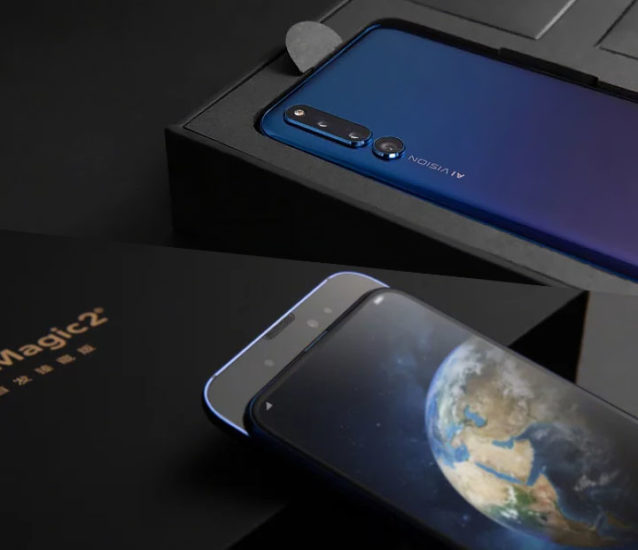 The Honor Magic 2 is expected to be launched at an event in China on October 31. As of now, there is no confirmation about the price of the upcoming handset. However, it is expected to come with a premium price tag (around Rs 39,990).

Also read: Xiaomi Mi 8 Explorer With Translucent Back Launched In China – All You Need To Know

In terms of optics, the upcoming handset is said to sport a triple camera setup (16MP + 24MP + 16MP) on the back and a 24MP front camera. The Honor Magic 2 is said to feature a camera slider and a movable motor for the front camera. It can be manually operated and comes with ‘AI Vision’ branding.

The innovative smartphone will be backed by a 3400mAh non-removable Li-ion battery with Huawei’s 40W SuperCharge technology (tipped to include a ‘Magic Charger’).

The latest teasers show the Honor Magic 2 and its retail box. The triple cameras on the back are supported by an LED flash on top. The back panel features a new gradient color design alongside the retail box with standard branding. It comes in Blue and Red color options.

Additionally, the upcoming handset is expected to sport close to 100% screen-to-body ratio. As per recent reports, the Hoor Magic 2 sports a 6.0-Inch AMOLED display with a resolution of 1440 x 2880 pixels, an aspect ratio of 19.5:9 and pixel density of 537ppi. The smartphone does not appear to have any sort of notch on top. The upcoming device will come with 15 layers of protection

Recently, the company launched its Honor 8X and Honor 8X Max smartphones in the Chinese market. Both devices come with a glass-finish back panel and dual rear cameras. While the Honor 8X comes with an iPhone X-like display notch, the Honor 8X Max features a waterdrop notch. Additional features include Dolby ATMOS surround sound and AI support.

The brand also launched its Honor 7S smartphone in India at Rs 6,999. It is being touted as one of the cheapest smartphones with an 18:9 display. The new handset sports a 5.45-inch FullView display with HD+ resolution, a pixel density of 295ppi, and 18:9 aspect ratio. It is powered by a quad-core MediaTek MT6739 processor along with 2GB RAM and 16GB internal storage (expandable up to 256GB).