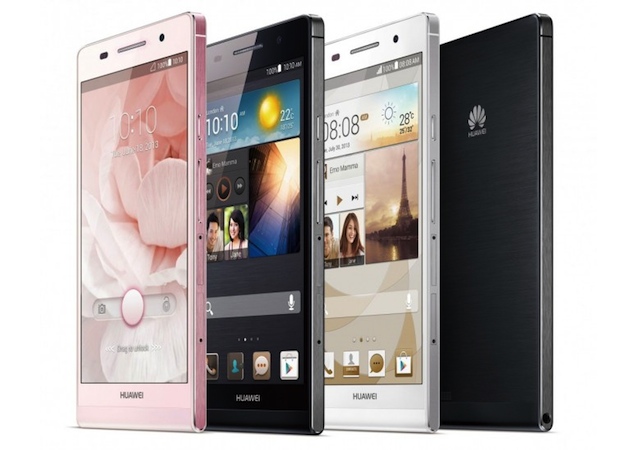 Huawei Ascend P6 popular as the slimmest smartphone measures 6.2mm in thickness, while weighing 120 grams of mass. It features a 4.7-inch LCD display with a resolution of 720×1280 pixels. It is powered by an in-house chipset, the Huawei K3V2 quad-core processor, clocked at 1.5GHz along with 2GB of RAM.

The Ascend P6 also features a 8-megapixel rear camera with a BSI sensor, which is capable of recording 1080p HD videos, and a 5-megapixel front-facing camera promoted as good enough for taking selfies. It runs on Android 4.2.2 Jelly Bean and features Huawei’s Emotion custom UI 1.6 OS layering on the top. It comes with 8GB of inbuilt storage which is further expandable up to 32GB via microSD card and has a 2000 mAh battery.

The Huawei Ascend P6 will be available in black and white with matching color cases. The phone will be retailed at an MRP of Rs.29,999 across all leading mobile stores and also through e-commerce portals including Flipkart and Snapdeal. The smartphone comes in Black, Pink and White colours.

Huawei Ascend P6 has got some decent reviews from the people using the smartphone where it has been launched. It is quite slim but still not the slimmest because another Chinese manufacturer Umeox had unveiled a 5.6 mm thin X5 soon after the P6 was launched. We are yet to know about these device but will definitely keep you in touch with the performance of the Ascend P6 as we get the device.