Huawei has finally taken the wraps off its flagship P8 smartphone at an event in London. Crafted from single piece of metal, the handset features unibody all metal design and measures mere 6.4 mm in thickness. In line with the previous rumors, the device packs a 2.0 GHz octa-core HiSilicon Kirin 930 processor paired with 3 GB of RAM and sports a 5.2-inch full HD IPS display. Other specifications of the handset include 16 GB/64 GB of inbuilt storage, 13 mega pixel rear camera, 8 mega pixel front facing camera, Android 5.0 OS wrapped under EM UI 3.1 and 2680 mAh battery. The P8 comes with 4G LTE support and will be available in silver, gold, black and grey color variants. 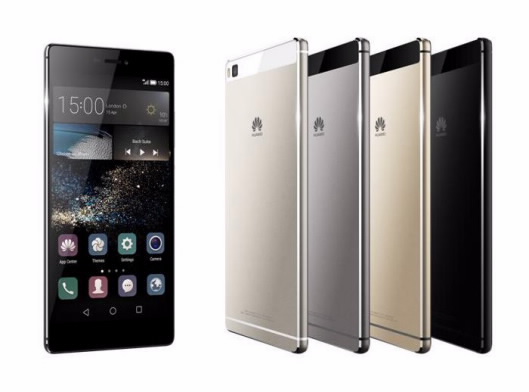 It also features an E-Ink cover accessory with a 4.3-inch display for outdoor reading. The P8 will be available in more than 30 countries including China, Columbia, France, Germany, Mexico, Spain, South Africa, Turkey, UAE and the United Kingdom. It will be available in two variants based on storage and color options- standard version (16 GB) which will retail at €499 and the premium version (64 GB)  will be available for €599.

Features and Specifications of Huawei P8

“The goal of Huawei P8 is to become the most user-friendly smartphone for consumers globally. Through in-depth market research, Huawei has addressed the most pressing pain points for premium smartphone users today. Huawei seamlessly combines the best elements of style and durability in this device, delivering a revolutionary user experience – especially in terms of camera capabilities and network connectivity. Building on the outstanding market performance of Huawei’s P series, we fully believe the Huawei P8 will become one of the most popular smartphones of 2015,” said Richard Yu, CEO of Huawei Consumer Business Group.

Chinese manufacturer Huawei seems gearing up for the launch of its next flagship device Huawei P8 which will succeed the Huawei Ascend P7 smartphone. Huawei has started sending out invites in China for an event which is scheduled on April 15, reports GSMInfo. At the event, Huawei is likely to launch its much anticipated P8 device. The invite sent by Huawei however, does not give a clear picture about what the company is going to launch at the event and the invite reads “It’s Coming” with Huawei’s logo on it. Read on to find more information on specifications, features, price and availability of the upcoming Huawei handset. As for specifications, the Huawei P8 is rumored to feature a 5.2 inch full HD touchscreen display and is likely to run Android 5.0 Lollipop. Other specifications of the handset are expected to be a 13 mega pixel rear camera with optical image stablisation, 8 mega pixel front facing camera, 3 GB of RAM, 32 GB of inbuilt storage, 64-bit octa-core Kirin 930 processor, unibody design and a 2600 mAh battery.

The predecessor Huawei Ascend P7 was launched back in 2014. As far as specifications of the handset are concerned, it is powered by a 1.8 GHz quad-core Cortex-A9  processor and runs Android 4.4 KitKat OS wrapped under Huawei Emotion UI 2.3. Other features of the handset include a 5 inch full HD display, 2 GB of RAM, 16 GB of inbuilt storage (expandable up to 64 GB), 13 mega pixel rear camera, 8 mega pixel front facing camera and a 2500 mAh battery.

After a number of leaks and rumors, we have received a clear picture of what Huawei P8 might bring with it and nothing has been left to imagination. Yet we would ask you to take this information with a pinch of salt and wait until Huawei’s next flagship is actually unveiled at the event. Stay tuned with us for more updates!

Also Read: Huawei Honor 6 Plus To Launch In India On March 24- Specs & Hands On Video