HTC, at an event in New Delhi launched its HTC One M9+ and One E9+ smartphones in the Indian market. Both devices pack top notch features and look premium in design. The HTC One M9+ and E9+ will compete with the recently launched Samsung’s flagship phone, the Galaxy S6. If you are confused about which handset to buy from these three handsets, then read on to find out how HTC One M9+ vs HTC One E9+ vs Samsung Galaxy S6 compare with each other in terms of specs, features and price to make an informed decision and pick the best smartphone out of the three! 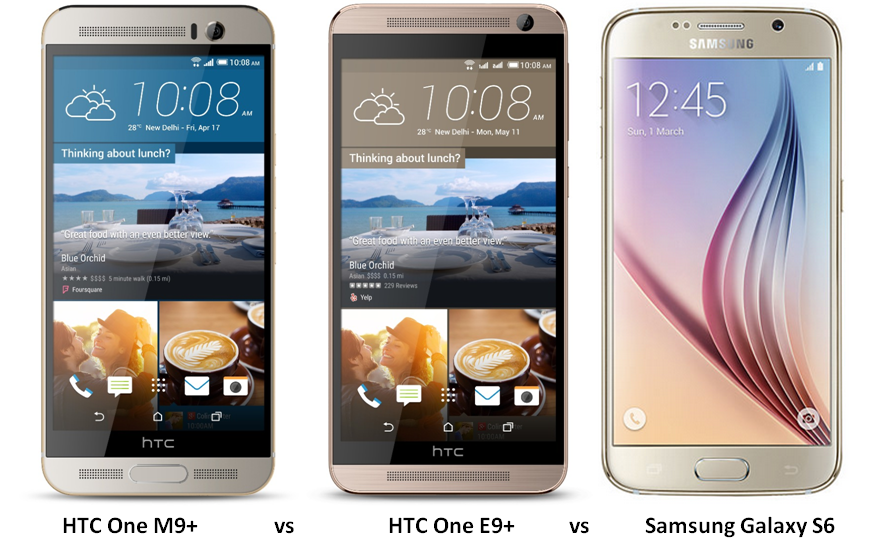 Specifications and Features Comparison: HTC One M9+ vs HTC One E9+ vs Samsung Galaxy S6

HTC one M9+ and One E9+ both are powered by an octa-core MediaTek helio X10 SoC clocked at 2.2 GHz and 2.0 GHz respectively alongside PowerVR G6200 GPU. The Samsung Galaxy S6 under the hood, packs a 2.1 GHz octa-core Exynos processor paired with Mali-T760 GPU.

All the three devices pack Quad-HD displays with 2560 x 1440 pixel resolution and Corning Gorilla Glass 4 protection, however there is difference in the display sizes. The Galaxy S6 packs a 5.1 inch display with 577 ppi pixel density, HTC One M9+ and One E9+ pack 5.2 inch and 5.5 inch displays respectively with 534 ppi pixel density.

All three smartphones house 3 GB of RAM. HTC One M9+ and E9+ house 32 GB and 16 GB of inbuilt storage with expandability support via microSD card. Samsung Galaxy S6 can be grabbed in three variants based on storage- 32 GB/62 GB/128 GB and lacks microSD card support.

HTC one M9+ and Galaxy S6 flaunt their Fingerprint sensors. HTC One M9+ and One E9+ feature HTC BoomSound with Dolby Audio while Galaxy S6 comes with heart rate sensor and Samsung Pay.

On design front, the HTC one M9+ comes with unibody all metal design while E9+ features plastic back with metal frames on its sides. The Galaxy S6 flaunts its glass and metal body.  With 6.8 mm thickness and 138 grams weight, Galaxy S6 is also the sleekest and lightest in the comparison.

All three smartphones pack top notch features and premium design. They flaunt their mighty configuration, large displays, good battery back up and latest operating system. The HTC one M9+ and Galaxy S6 feature metal design and come with fingerprint sensor which is not present in One E9+ phone however the absence of these features will be justified if the handset will be launched at lower price than its rivals.

Which handset among HTC One M9+ vs HTC One E9+ vs Samsung Galaxy S6 do you think is better? Share your views with us in the comments below!