MWC 2015 became a platform for smartphone makers to display their new devices. The event witnessed many launches and announcements of new products from various giants like Samsung, HTC etc. The Samsung Galaxy S6 and HTC One M9 were among the flagship devices which attracted the most attention. Thus we have pitted two recently launched flagship devices Samsung Galaxy S6 and HTC One M9  along with Apple iPhone 6 against each other to see how they fare. Read on to find out how Samsung Galaxy S6 vs HTC One M9 vs Apple iPhone 6 compare with each other in specifications and features. 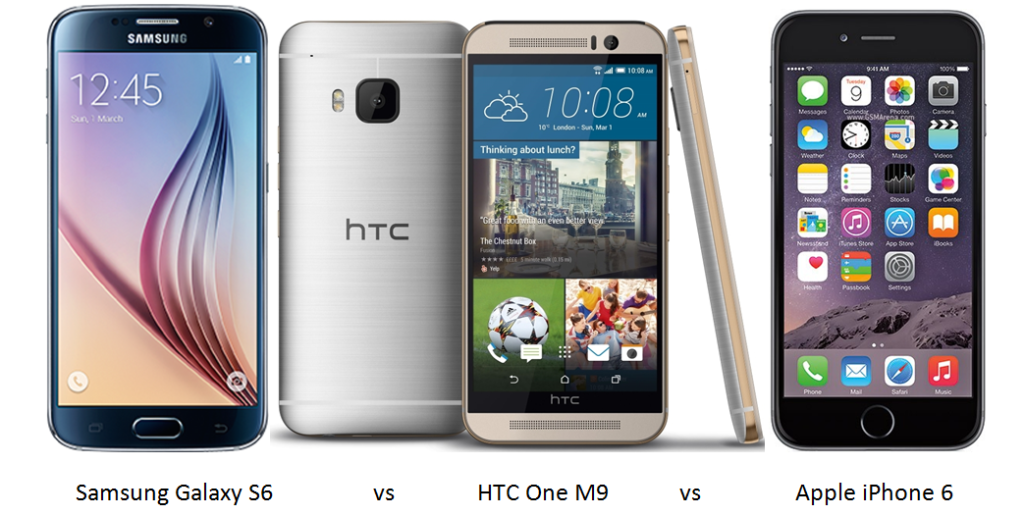 All the three handsets pack different configuration. The Galaxy S6 features a 2.1 GHz Octa-core Exynos processor while HTC One M9 is powered by 2 GHz Octa-core Qualcomm Snapdragon 810 proessor, both handsets coupled with 3 GB of RAM. iPhone 6 on the other hand is backed up by Dual-core Apple A8 chipset clocked at 1.4 GHz accompanied with 1 GB of RAM and PowerVR GX6450 GPU.

The iPhone 6 flaunts its premium look with anodised aluminum casing. Samsung Galaxy S6 comes with new all metallic and glass unibody design while the HTC One M9 features  brushed back  with a shiny and appealing look.

All the three handsets support 4G LTE and NFC besides usual set of connectivity options like Wi-Fi, Bluetooth etc.

Galaxy S6 and HTC One M9 run on Android 5.0 Lollipop, with TouchWiz UX and Sense 7.0 UI wrapped on their tops respectively. iPhone 6 runs on iOS 8.

Galaxy S6 and iPhone 6 both boast of their Fingerprint sensors, they also come with Samsung Pay and Apple Pay respectively.

Samsung Galaxy S6 measures 6.8 mm in thickness followed by iPhone 6 with 6.9 mm thickness. iPhone 6 is the lightest of all with 129 grams of weight.

Neither of the three handsets fail to impress us in any department. All the three devices, Samsung Galaxy S6 vs HTC One M9 vs Apple iPhone 6 feature high end specs in every front, and act as a beast when it comes to performance. However Samsung Galaxy S6 and HTC One M9 come with Octa-core processors, massive 3GB RAM, high resolution camera, slightly larger display and bigger batteries as compared to iPhone 6. Thus, the new flagships are here to give iPhone 6 a run for money. But we cannot forget that, iPhone is known for having premium built, user friendly interface, seamless performance and one of the best cameras you can find in a smartphone.

Which among the three handsets Samsung Galaxy S6 vs HTC One M9 vs Apple iPhone 6 do you think is better? Share your thoughts with us in the comments below.