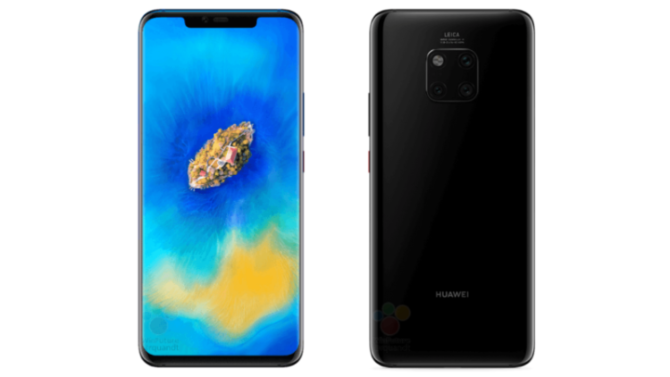 According to latest leaks and rumors, the Huawei Mate 20 Pro sports a 6.39-inch OLED display with QHD+ (1440×3120 pixels) resolution. It is powered by a HiSilicon Kirin 980 processor along with Mali-G72 GPU and 6GB/ 8GB RAM. The internal storage can be expanded up to 256GB.

In the power department, the Mate 20 Pro is said to be backed by a huge 4,200mAh battery with SuperCharge technology (goes from zero to 70 percent in just 30 minutes of charge). The handset is also tipped to come with wireless charging support. It will also double as a wireless charger for the upcoming Huawei Freebuds 2 headphones (similar to Apple AirPods).

The upcoming smartphone is said to sport a triple camera set up at the back. It is tipped combine e a 40-megapixel primary sensor (f/1.8 aperture), 20-megapixel secondary sensor (f/2.4 aperture), and an 8-megapixel ultra wide-angle sensor. The 24-megapixel front camera is tipped to come with a Vertical Surface Emitting Laser (VSEL) module that will enable 3D facial recognition (similar to Apple Face ID feature).

The handset will combine four pixels into one to deliver better images. It is said to have two NPUs to help the hardware analyze the image content and then adjust the settings accordingly. Additional features might include 5x optical zoom. Users will also be able to shoot ultra macro shots (from a short distance as 2.5cm).

The upcoming handset will come with an IP68-certification (water and dust resistance). It will feature an in-display fingerprint sensor. The smartphone is only 8.6mm in thickness and weighs 189 grams. It is said to come in four color options – Twilight, Black, Blue, and Green.