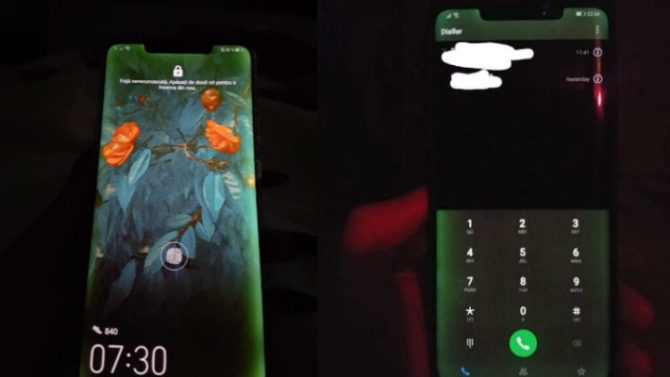 The Huawei Mate 20 Pro comes with a great package of specs and features (including triple rear cameras, Kirin 980 processor, fast charging, etc). It has been up for sale in select European markets for over a week. Now, several users are complaining about screen bleeding issues with the new smartphone.

According to recent reports, multiple Huawei Mate 20 Pro units have a light bleeding issue that leads to a distinguishable green tint around the edges. This tint is specially noticeable in extremely dim lighting conditions or when the screen brightness is too low, or while using dark wallpapers.

The premium flagship smartphone uses an OLED display panel. Several users speculated that the bleeding issue might be caused by glue used for the display. This issue has been seen on other handsets in the past. Meanwhile, another forum attributed the new issue to the flexible OLED screen on Mate 20 Pro that features a special design curved edges.

In Finland, Huawei is offering a free-of-charge replacement of faulty Huawei Mate 20 Pro units. Similar steps have been reported in the UK as well. However, the company is still investigating the new issue. As of now, instead of trying to get their handset repaired, users are advised to demand a full replacement from Huawei service centers.

“We are investigating for a long time why a small part of phones have been green in some countries. In Finland, consumers get a new phone without charge if they have a faulty display,” said Elina Takala, Huawei’s Director of Marketing and Communications, Finland.

The Pro variant is powered by the same HiSilicon Kirin 980 processor along with 6GB RAM and 128GB internal storage. It runs Android 9.0 Pie operating system with EMUI 9.0 on top. The 4,200mAh battery comes with support for 40W SuperCharge technology. However, it also supports 15W fast wireless charging support. Huawei claims that it is the “world’s first wireless reverse charging” technology on a smartphone.

Stay tuned for more updates on this issue.