Huawei has unveiled the Huawei MediaPad X2 tablet at MWC 2015 in Barcelona. The MediaPad X2 is successor to the MediaPad X1 tablet which was launched last year. With mere 7.28 mm thickness, the MediaPad X2 is being called the  “world’s slimmest 7-inch phablet” by the company.  As far as specifications of the tablet are concerned, it is powered by 64-bit 2 GHz Kirin 930 Octa-core processor paired with Mali-T628 GPU. Featuring a 7 inch full HD (1200 x 1920 pixel resolution,323 ppi pixel density) display, it runs on Android 5.0 Lollipop with Emotion UI 3.0 wrapped on the top. 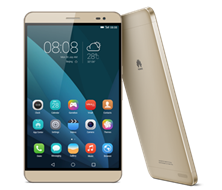 Based on RAM and inbuilt storage, the tablet will be available in two variants, one variant with 2 GB RAM and 16 GB inbuilt storage (Moonlight Silver body) and other variant with 3 GB RAM and 32 GB of inbuilt storage (Amber Gold body). It features up to 128 GB of expandable storage via microSD card. The tablet sports a 13 mega pixel rear camera while there is also a 5 mega pixel front facing camera on board. It packs a 5000 mAh battery, measures 183.5 x 103.9 x 7.18 mm and weighs 239 grams. The MediaPad X2 also features dual-SIM support, voice calling support and 4G LTE support.

“Following the success of the Huawei MediaPad X1, and having inherited the signature feature of our large screen design, the Huawei MediaPad X2 represents our faith and commitment in creating better quality products with our technology and innovation. As the second generation of MediaPad, Huawei MediaPad X2 focuses on the five classic applications that are most important to users, which include call quality, social media apps, online shopping, video and camera features to provide an enhanced user experience,” said Richard Yu, CEO, Huawei Consumer Business Group.

The pricing and availability details of Huawei MediaPad X2 have not been revealed yet. Stay tuned with us for more updates!