Apple has finally launched its much-anticipated iPhone X handset. The new smartphone comes with features like bezel-less design, Face ID, and wireless charging. Can the super-expensive handset compete with cheaper yet powerful offerings by rival brands? Let’s do a quick comparison and find how the new iPhone model compares with the latest OnePlus ‘flagship killer’. Read more to find about Apple iPhone X Vs OnePlus 5 Comparison – What’s the difference? 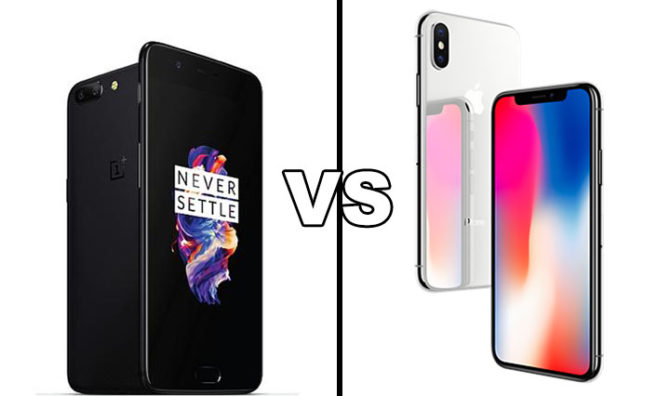 The Apple iPhone X is powered by a Hexa-core A11 Bionic processor which is being touted by Apple as ‘the smartest chip ever in a smartphone’. The new processor is also supported by a 30 percent faster GPU.

On the other hand, the OnePlus 5 is powered by a fast octa-core Qualcomm Snapdragon 835 processor. It is backed by a 3300mAh battery with Dash Charging support.

Both handsets feature a dual camera setup on the back. The Apple iPhone X uses two 12-megapixel cameras with f/1.8 and f/2.4 aperture. Camera features include Optical Image Stabilization (OIS), quad-LED True Tone flash, Portrait Mode (allows you to take images with depth of field effects) and Portrait Lighting (allows you to select the lighting effect from different options). The 7-megapixel TrueDepth camera on the front also comes with Portrait Mode and Portrait Lighting features.

On the other hand, the dual camera setup on OnePlus 5 combines a 16-megapixel primary lens with f/1.7 aperture and a 20-megapixel telephoto lens. It also features a 16-megapixel front camera for selfies and video calling. On paper, both devices look quite competent. However, we will have to wait for test results in real-world conditions.

While many of the previously mentioned features are absent on OnePlus 5, it does come with a Dash Charging feature, a reading mode, and new gesture controls. A fingerprint scanner is integrated into the home button.

While the Apple iPhone X sports the best features on iOS platform, the OnePlus 5 can stand on its own too. It offers high-end specs at almost one-third the price of iPhone X. Despite missing few features like Face ID, bezel-less design or wireless charging, the OnePlus 5 offers more value for money. Which of the two flagship smartphones would you go for? Let us know in the comments section below.