LeEco (formerly known as Letv) and Huawei’s e-brand Honor launched their Le 1s and Honor 5X smartphones respectively, in India last month, in January 2016. Both smartphones are close competitors and have a lot of similarities between them.

If you are not able to decide which smartphone to buy, then we can help you make an informed decision. In this post we have pitted the two phones against each other to ascertain which is a better value for money device. Read on to find out how LeEco Le 1s vs Honor 5X compare with each other in terms of specifications, features, camera performance, benchmarks, gaming, price and more. 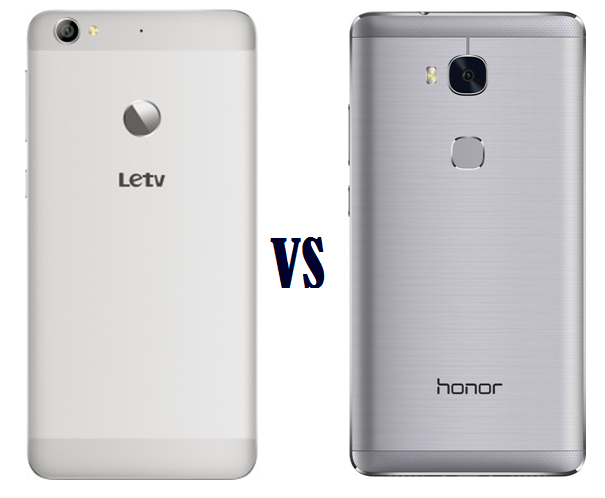 On aesthetics front, both smartphones flaunt their unibody metal design which looks very premium. The Honor 5X has brushed metal design on the rear with slight curves towards edges while the Le 1s has similar design in matte finish.

On the front, both phones have a 5.5-inch full HD display but the display of Le 1s is nearly bezel-less. Le 1s has three touch capacitive buttons which are backlit and are a part of the bottom bezel of the phone. It also comes with LED notification above the display and type C port on the bottom edge. Honor 5x on the other hand, comes with on-screen buttons and micro USB charging port and LED notification. The Le 1s feels a bit heavy with 169 grams of weight compared to 158 grams weight of Honor 5X.

Both phones come with 5.5-inch full HD display with resolution of 1920×1080 pixels. Both phones have sharp and vivid display with good viewing angles and good sunlight legibility. The Le 1s however, is slightly better as it comes with Corning Gorilla protection and is more vibrant.

Call clarity and signal reception are equally good on both smartphones. As for sound, we found out that sound on both speaker and headphones is better on Honor 5X.

Under the hood, the Honor 5X is packs an octa-core Qualcomm Snapdragon 616 processor coupled with 2GB RAM and Adreno 405 GPU. LeEco Le 1s, on the other hand, uses an octa-core MediaTek Helio X10 processor clubbed with 3GB RAM and PowerVR G6200 GPU.

On testing the phones on An tu tu benchmarks, we got a score of around 55300 points for Le 1s and 35800 points for Honor 5X. While both phones handle multi-tasking with ease, the Honor 5X showed some minor lags here and there while playing heavy games. There was no noticeable heating though. The Le 1s on the other hand, played the games seamlessly but it did get heated up a bit.

In performance department, the Le 1s has an upper hand since it has slightly superior performance due to additional gigabyte of RAM.

Both phones sport a 13 mega pixel primary camera on the rear and a 5 mega pixel front facing camera. The rear camera of Honor 5X is accompanied with dual LED flash. The le 1s comes with single LED flash and supports 4k video recording. Both devices have different modes and filters and are capable of taking impressive shots with both front and rear cameras in natural, artificial as well as in low light.

The camera of Honor 5X however, slightly outperforms the Le 1s, as the images taken by it have more detailing and clarity.

Both phones are fueled by non-removable 3000mAh battery and are good enough to deliver one full day of usage, if used moderately. The Honor 5X supports Qualcomm’s Quick Charge 3.0, which is claimed to charge the battery from 0 to 50 percent in just 30 minutes. Letv Le 1s, on the other hand, is said to deliver up to 3.5 hours of talk time with just 5 minutes of charging.

The Le 1s supports USB OTG, but for that, you will need Type C USB pen-drive or Type C OTG cable or adapter. As for Honor 5X, the unit which we have got, didn’t support OTG, but some publications claim that it supports USB OTG.

If you are someone who likes stock Android experience, then you may be disappointed with these phones. But if you are a fan of customization, then you can go for either of these phones.

LeEco Letv Le 1s vs Honor 5X- Which One Should You Buy?

Both Letv Le 1s and Honor 5X have a lot of similarities between them. Both devices look very premium and have powerful innards. If you are looking for a phone which is cheaper in price, has an additional gigabyte of RAM, more inbuilt storage and vibrant display, then you should go for LeEco Le 1s. If you are looking for a phone with nice camera combination and great audio, then Honor 5x is worth putting your bet on.

Which smartphone- LeEco Letv Le 1s vs Honor 5X do you think is better? Share your views with us in the comments section below!