LeEco (formerly known as Letv), has launched its Le 1s smartphone in the Indian market. Priced at Rs. 10,999, the phone flaunts its powerful configuration and stunning design.

It will compete with the likes of Lenovo K4 Note and Xiaomi Mi 4i. If you are not able to decide, which device you should buy, then we are here to help you. In this post, we have pitted the three  phones against each other to ascertain which is better so that you choose the right one. Read on to find out how LeEco Letv Le 1s vs Lenovo Vibe K4 Note vs Xiaomi Mi 4i compare with each other in terms of specifications, features and price. 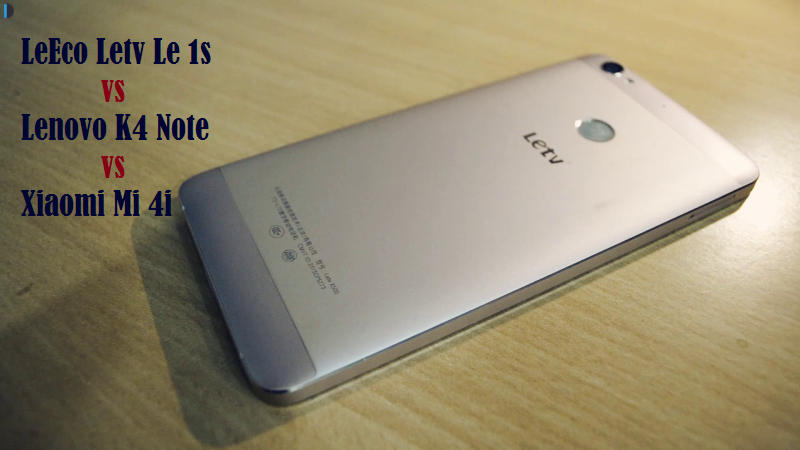 The display resolution of all three phones is 1920×1080 pixels. The Le 1s and Vibe K4 Note feature large 5.5-inch display as compared to 5-inch display of Xiaomi Mi 4i.

Letv 1s and Xiaomi Mi 4i house 32GB and 16GB of internal memory respectively and lack microSD card support for expandable storage. Lenovo Vibe K4 Note comes with 16GB of inbuilt storage which can be expanded further up to 128GB via microSD card.

Lenovo Vibe K4 Note is the winner in this department with 3300mAh battery. It is closely followed by Xiaomi Mi 4i with 3120mAh battery and LeEco Le 1s with 3000mAh battery.

You can buy these smartphones from following links at best price:

Which smartphone among LeEco Letv Le 1s vs Lenovo Vibe K4 Note vs Xiaomi Mi 4i, do you think is better? Share your views with us in the comments section below.