Micromax has been the face of the budget mobile phones for a while and now have become a face of the smartphones on a budget. Staying true to their tagline, Nothing like anything, Micromax has just launched their Spreadtrum’s processor based Micromax A65 Smarty which is the latest member of the Smarty family of smartphones from Micromax. The device is launched right after the launch of the A54 and has been priced quite competitively. Micromax A65 will retail for Rs.4,999.

A 4.3 inch capacitive display with a resolution of 800×480 pixels will adorn the front of the smartphone and such a big screen at this price point is something we have not seen yet from other Indian smatphone makers and Miccromax might just get the first mover advantage once more in this aspect. It has a dual sim support and 1GHz Spreadtrum processor based on Cortex A5 architecture which would offer decent performance since the device would ship with 512 MB of RAM. 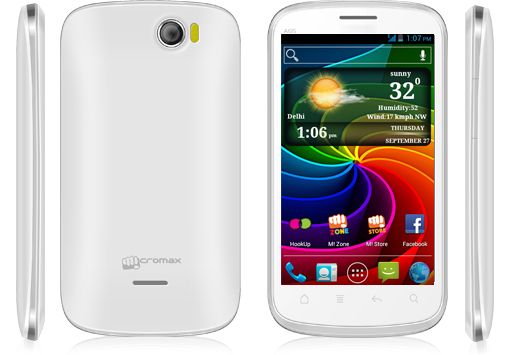 The only issue we found with the device was that it would run on Android 2.3 i.e. Gingerbread which is quite an old version of the OS considering that most of the handsets getting launched come with atleast Android ICS, if not Jelly Bean. The A65 covers all the connectivity options and has Wi-Fi and Bluetooth support but misses out on 3G but at this price point, even the competition does not offer 3G.

At the back you will find a 2MP snapper with an LED flash and the juice will be provided to the device by a 1,350 mAH battery which would give the device enough power to last for almost 2 days on normal usage. The smartphone is the first one from the house Micromax to be launched with a Spreadtrum chipset and seeing that Spreadtrum has invested $10 million in Micromax, we will surely see a lot of Spreadtrum based smartphones from Micromax in future. And Micromax, there’s nothing like you folks.