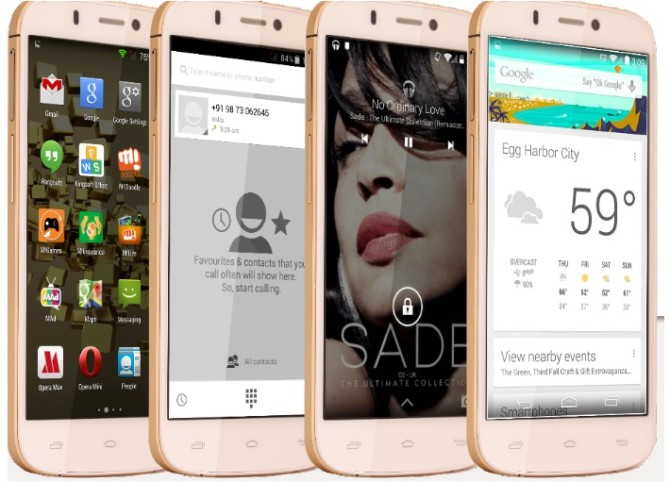 Talking about the design of the smartphone it has full-aluminium gold finished body. So the Gold finish showing in pictures is not a polycarbonate finish its aluminium gold finish out the box. And in some other pictures we can clearly see that some sort of iPhone type design as well in the device, it’s not near the design of iPhone but Micromax tried. We have to do hands on with this device to conclude further.

Talking about the smartphone in details, the 5.5-inch massive display smartphone features full HD IPS display with the screen resolution of 1920*1080pixels. There is 2GHz Octa Core MediaTek processor paired with 2GB of RAM out of the box. The smartphone runs on latest operating system Android 4.4 Kitkat.

On the photography front, there is 16-megapixel auto focus and fully featured camera at back along with 5-megapixel front facing camera at front for video calling and selfie. The smartphone has 32GB of internal storage inside and there is no expandable memory. The Canvas Gold has 2300 mAh battery packed inside.

The Canvas Gold is a dual SIM smartphone along with 3G, WI-FI, Bluetooth and GPS connectivity as well on board. The smartphone is listed in two colours White and Gold and price around INR 23,999 although there is not any official words from Micromax regarding launching and price.

The smartphone is only second smartphone from the company that has 16-megapixel rear camera out of the box, the first smartphone was Micormax Canvas Knight, launched earlier this year. Both devices have 2GB RAM and 32GB storage combinations as well. The new Canvas Gold will compete with recently launched  Alcatel One Touch Idol X+.