Micromax last week launched its first 4G LTE enabled smartphone, called the Micromax Canvas Knight 2 at Rs. 16,299. It will go on sale starting June 10, 2015. The handset packs decent features and will compete with the likes of Phicomm Passion P660 which was launched was also launched this month and Yu Yureka phone.

If you are confused about which smartphone to buy among these three handsets, check out this post to make the right decision. Read on to find out how Micromax Canvas Knight 2 vs Phicomm Passion P660 vs Yu Yureka compare with each other in terms of specs, features and price. 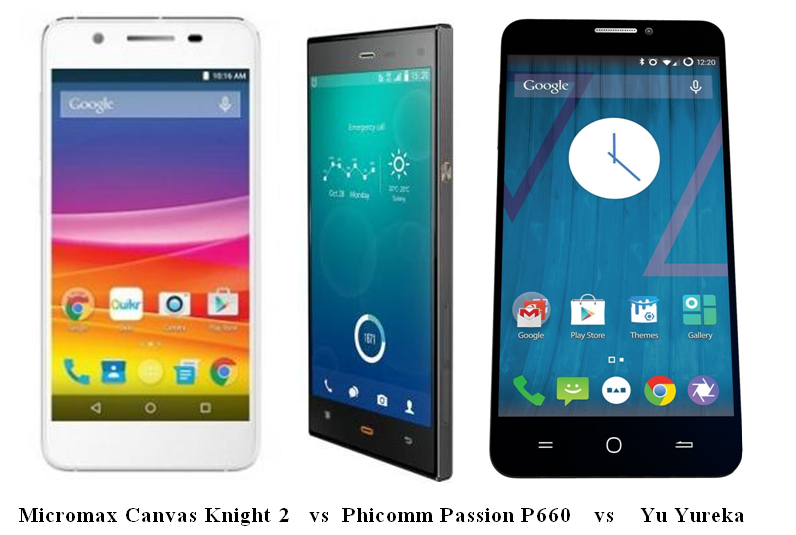 This round is a tie since all the three handsets are powered by an Octa-Core Qualcomm Snapdragon 615 processor coupled with 2GB of RAM.

This round again is a tie. All the the three phones sport a 13 mega pixel auto focus rear camera with LED flash and a 5 mega pixel front facing camera.

There is 16GB of inbuilt storage on all three handsets. The storage of Canvas Knight 2 and Passion P660 is expandable up to 64 GB via microSD card as opposed to 32GB of expandable storage of Yu Yureka.

The Yu Yureka is backed up by a 2500mAh battery. Phicomm Passion P660 and Micromax Canvas Knight 2 pack 2300mAh and 2260mAh battery respectively.

Though the specifications of all three handset are similar, there is considerable difference between their prices. The Micromax Canvas Knight 2 is priced the highest at Rs. 16,299 followed by Passion P660 at Rs. 10,999 and lastly the Yu Yureka which is available at Rs. 8,999.

Although these three smartphones look very much similar in their specs, yet there is a considerable price difference between them. The Micromax Canvas Knight 2 is the most expensive in the lot running Android 5.0 Lollipop OS and comes with more expandable storage. The Passion P660 comes with better screen resolution and more expandable storage. The Yu Yureka, despite being the cheapest phone in this comparison, offers larger display, more battery and Cyanogen 11 based Android 4.4.4 KitKat OS. If you can compromise with screen resolution and expandable storage then Yu Yureka is surely a good deal for you!

Which handset among Micromax Canvas Knight 2 vs Phicomm Passion P660 vs Yu Yureka do you think is better? Share your views with us in the comments below!