Microsoft has launched its Lumia 640 XL and 640 smartphones in India. Both handsets were showcased at Mobile World Congress event 2015 in Barcelona. Priced at Rs. 15,799, the Lumia 640 XL can be grabbed from both offline and online channels in the country while Lumia 640 carries a price tag of Rs. 11,999  and is exclusively available through e-commerce retailer Flipkart.com. In this post, we have pitted these two handsets against the Lumia 730 phone which was released in India back in 2014. If you are confused about which handset to buy, check out this post to find out how Microsoft Lumia 640 XL vs Lumia 640 vs Lumia 730 compare with each other in specifications, features and price. 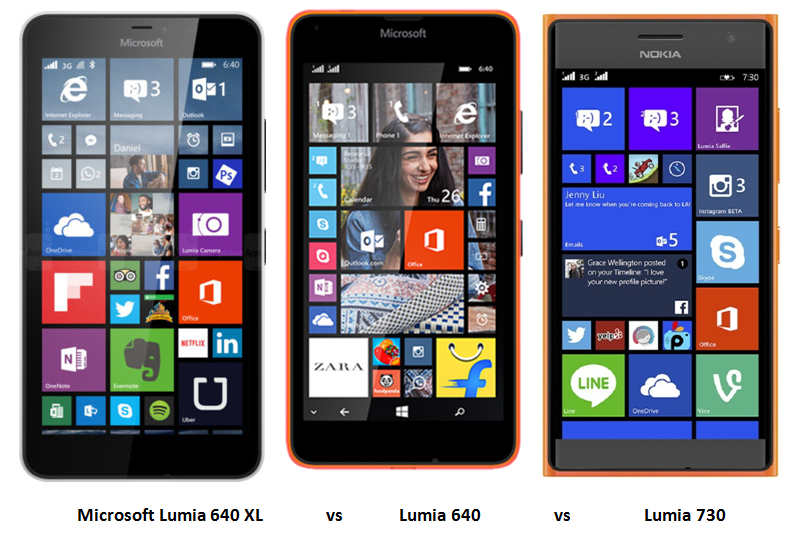 All the three handsets are powered by same processor. There is a quad-core Qualcomm Snapdragon 400 processor clocked at 1.2 GHz coupled with Adreno 305 GPU which powers all these devices.

Again in this department, the Lumia 640 XL, Lumia 640 and Lumia 720 have a tie since they run Windows Phone 8.1 operating system with Lumia Denim.

This is one of the departments where the handsets differ. The Lumia 730 features a 4.7 inch HD OLED display, Lumia 640 packs a 5 inch IPS LCD display while 640 XL comes equipped with largest 5.7 inch HD IPS LCD display. Screen resolution of these phones is 1280 x 720 pixel and they also come with Corning Gorilla Glass 3 protection.

All three Lumia phones again house 1 GB of RAM and 8 GB of inbuilt memory which is further expandable up to 128 GB via microSD card.

All the three devices pack mighty configuration. Lumia 640 is available at lower price of Rs. 11,999 yet it disappoints in front camera criterion. The Lumia 730 lags behind other two handsets in display size and rear camera department. The Lumia 640 XL thus, looks like a value for money device which does not fail to impress us on any front.

Which among the three smartphones Microsoft Lumia 640 XL vs Lumia 640 vs Lumia 730 do is think is better? Share your views with us in the comments below.