Lenovo has finally launched its Moto X4 smartphone in India. The new handset comes with dual cameras, front flash, Snapdragon 630 SoC, Amazon Alexa support and an IP68-rating (dust and water resistance). Can it take on high-end offerings by the likes of Samsung, Xiaomi, OnePlus etc? Let’s do a quick comparison and find out. Read more to find Moto X4 Vs Oneplus 5 Comparison – Which Phone Is Better? 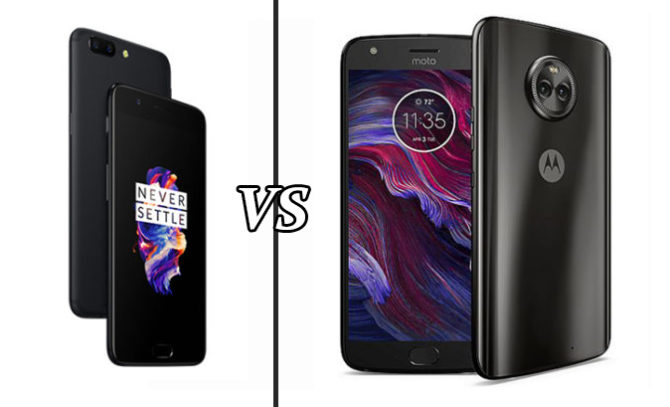 The Moto X4 has an advantage over the OnePlus flagship in this segment. While the 3GB RAM/ 32GB internal storage variant of Moto X4 is priced at Rs 20,999, the 4GB RAM/ 64GB storage variant will cost you Rs 22,999.

The Moto X4 is powered by a 2.2GHz octa-core Qualcomm Snapdragon 630 processor. The 32GB/ 64GB internal storage can be expanded via a micro SD card (up to 2TB). It is backed by a 3000mAh non-removable battery with Fast Charge 3.0 support.

Whereas the OnePlus 5 packs a Qualcomm Snapdragon 835 processor. It comes in two variants – 6GB RAM/ 64GB internal storage one and a 8GB RAM/ 128GB storage variant. While it ships with extra RAM power, the internal storage is not expandable. The 3,300mAh battery supports Dash Charging feature.

The Moto X4 comes with Amazon Alexa support that allows users to carry out a voice-based search. Other features include Moto experiences (gestures like a 3-finger swipe for a screenshot), Moto Key (inbuilt password manager), one-button navigation, Moto Display, and Moto Voice. Additionally, the rear camera can scan barcodes, QR codes, and business cards. It can also recognize landmark/ objects.

The OnePlus 5 also comes with some new features such as a reading mode and new gesture controls.

The Moto X4 smartphone sports a metal (aluminum) unibody design with a dual camera setup on the back. It measures 148.35 x 73.40 x 7.99mm and weighs 163 grams. The Moto handset comes with an IP68 rating (water and dust resistance).

On the other hand, the OnePlus 5 sports a sleek design which looks similar to the iPhone 7 Plus. It is quite thin at just 7.25mm. The fingerprint scanner is integrated into the home button.

The Moto X4 is the first smartphone in India with new Snapdragon 630 SoC. The new handset seems to pack many cool features. However, the OnePlus 5 is a more powerful smartphone with a better processor, double RAM option, and slightly better battery life. Which of the two devices will you go for? Let us know in the comments section below.