HMD has officially announced the entry-level Nokia 2 smartphone. It is the cheapest smartphone by HMD global till date. The new handset will have to compete with budget handsets like Xiaomi Redmi 4A. Despite its low price, the Xiaomi smartphone offers several decent specs. Let’s do a quick comparison to see which one should you buy. Read more to find about Xiaomi Redmi 4A Vs Nokia 2 Comparison – Which Phone Is Better? 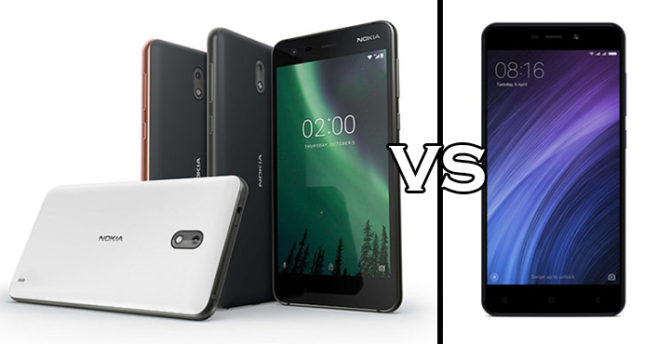 On the other hand, the Xiaomi Redmi 4A is available at a low price of Rs 5,999. So, the Redmi 4A has a slight advantage in this department.

While the Nokia 2 is backed by a massive 4,100mAh battery, the Redmi 4A comes with a 3120mAh battery. Still, the Xioami handset has an advantage in this segment too.

The Nokia 2 runs Android 7.1 Nougat operating system and comes with Google Assistant (first entry-level smartphone to carry this feature). The new handset features a polycarbonate body with a 6000 Series Aluminium frame. It measures 143.5 x 71.3 x 9.3mm and comes with IP52-rating (for drip protection).

Also read: Nokia 7 Vs Nokia 8 Comparison – Which Phone Is Better?

Both devices offer decent specs and features at an affordable price. The new Nokia 2 is the cheapest smartphone by HMD global till date. However, while it comes with a large battery, it falls short on other aspects. Overall, the Xiaomi Redmi 4A offers a better package.