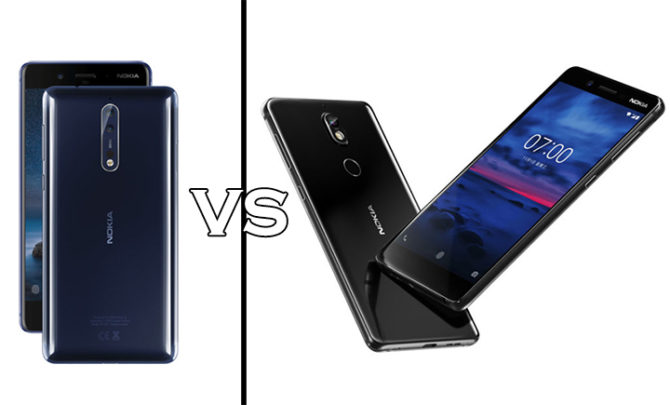 The Nokia 7 sports a 5.2-inch LCD display with full HD (1080p) resolution. The new handset is powered by a Qualcomm Snapdragon 630 chipset and 64GB internal storage (expandable). It is backed by a 3,000 mAh battery.

On the other hand, the Nokia 8 features a 5.3-inch IPS LCD display with a Quad HD resolution, 2.5D Gorilla Glass 5, and Nokia’s trademark Glance Screen. It is powered by a Qualcomm Snapdragon 835 processor and 4GB RAM. The 64GB internal storage can be further expanded via a microSD card (up to 256GB). It is backed by a 3090mAh battery.

The Nokia 7 sports a 16-megapixel rear camera with f/1.8 aperture and a dual-tone flash. On the front, it features a 5-megapixel wide-angle front camera. The Nokia 7 uses Carl Zeiss optics.

Both smartphones incorporate Nokia’s ‘Dual-sight’ technology. It allows you to capture videos and pictures on both the front and back cameras simultaneously. The new ‘Bothie’ feature allows you to use the front and rear camera at the same time in a split screen view. It works for both photos and videos. You can also live stream the Dual Sight video natively and in real-time to YouTube and Facebook.

Both smartphones run Android Nougat operating system out of the box. The company promises an Android Oreo upgrade in near future. The Nokia 7 features a glass and aluminum body. Other features include a 3.5 mm headphone jack and OZO technology (offer 360-degree crystal clear sound).

On the other hand, the Nokia 8 also sports an all-metal design made from a single block of aluminum. It is just 4.6mm thick at the edge. Other features include a fingerprint sensor, IP68 rating (dust and water resistance), OZO audio, USB Type-C port and dual speakers on the bottom edge.

Also read: Nokia 8 Vs OnePlus 5 Comparison – Which Phone is Better?

With the Nokia 8 is a high-end offering by the HMD Global, the Nokia 7 takes on the mid-range segment. It offers mostly similar features at a lower price tag. As of now, the mid-range smartphone remains exclusive to the Chinese market. Which of the two smartphones would you go for? Let us know in the comments section below.