Live images of the Moto Z3 Play has been leaked online by the XDA Developers. The Moto Z3 Play leak has allegedly been obtained from an internal Lenovo documentation with an upcoming 5G Moto Mod. 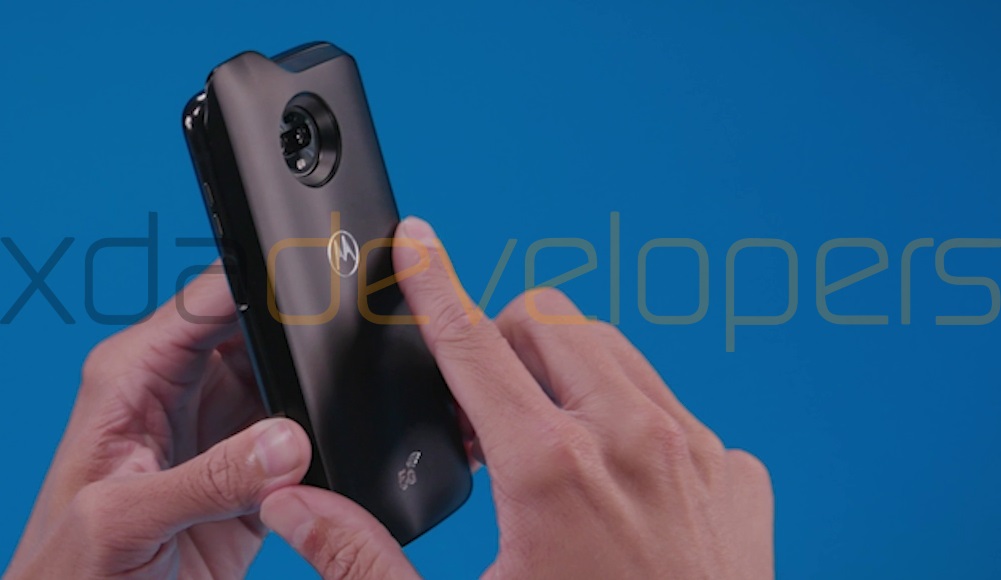 The Moto Mod was speculated to be launched at 2018 MWC. Moto G6 Plus may be getting an upgrade in terms of RAM and storage, the report speculates.

The Moto Z3 Play leak screenshots show us the smartphone’s front and side look. It is speculated to have a side-mounted fingerprint reader on the ride. The volume controls will be on the top.

It also reveals that Moto Z series smartphones will have an upcoming Moto Mod.

The Moto Z3 Play leak shows that the fingerprint reader probably will be embedded on a button below volume keys on the right-hand side. The device will also have dual-rear cameras aligned with the dual LED flash. Similar to its predecessor, the device will support 16 magnetic pins at the back to connect Moto Mods. The image predicts that the device won’t sport a 3.5mm headphone jack.

The smartphone’s images were earlier leaked online also. The leaked images showed dual rear cameras and a glass back design. The renders also mentioned that the device will not have front-facing home button. The device could have facial recognition. It could have a 12MP+8MP lens at the back. It could also have a 5MP selfie camera.

The smartphone will allegedly sport non-existent bezels on the sides. It will probably also have thin bezels on top and bottom of the display. The bezel at the bottom will also have a ‘Motorola’ branding in the home button’s place. The device could be a 5-inch Full HD+ display. It could be powered by the Snapdragon 636 processor with 4GB RAM and 32GB/64GB storage. The device might be backed by a 3,000mAh battery. It will most probably run Android Oreo out-of-the-box.

It will probably be revealed with the Moto Z3 and one more device, according to online reports. the variant details are not yet known. The new devices could have a white software button instead of a physical home button.

Article Name
Moto Z3 Play Leak Surfaces Online, Expected To Be Equipped With 5G Moto Mod
Description
Live images of the Moto Z3 Play has been leaked online by the XDA Developers. The Moto Z3 Play leak has allegedly been obtained from an internal Lenovo documentation with an upcoming 5G Moto Mod.
More related stories below: