Ahead of its probable launch at IFA event in September 2015 in Berlin, leaked renders of next generation Motorola Moto 360 have surfaced online. As per the recently leaked renders by @evleaks, the Moto 360 will be available in two sizes. The renders show two variants of the wearable- one with metal strap and while other variant features a leather strap.

The leaks also reveal that the physical button has been moved from 3 o’ clock position to 2 o’ clock position. Other features of the next gen Moto 360 include Android 5.1 Lollipop and 360×360 pixels resolution of the display. Rest of the specifications of next generation Moto 360 are scarce as of now and are expected to be announced at the IFA 2015. 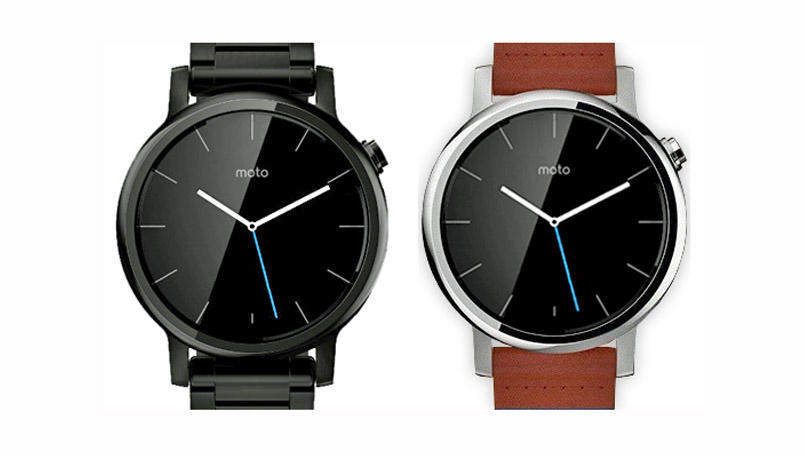 The previous gen Moto 360 was launched in India earlier this year in April 2015. It is powered by TI OMAP 3 processor coupled with 512 MB of RAM. The wearable runs Android wear operating system and is compatible with smartphones running Android 4.3 or later. There is a 320 mAh battery which backs up the device. It is said to offer battery life of up to one day on mixed usage on single charge. It comes equipped with pedometer sensor and Optical heart rate monitor sensor. The previous generation Moto 360 features a 1.5-inch Backlit LCD display with 320×290 pixels resolution, 205 ppi pixel density and Corning Gorilla Glass 3 protection for resistance against scratches. It flaunts its IP67 for water resistance.

While the launch date has not been revealed by the company yet, more details about specifications and features of next generation Motorola Moto 360 are likely to be announced later this at the IFA 2015, where it  is likely to see light of the day. Until then, stay tuned with us for more developments on this story!