Motorola has launched the Moto G Turbo Edition in India. It is the refined variant of Motorola Moto G 3rd Gen that was launched earlier this year. As a refreshed variant, it comes with few upgrades over the 3rd Gen Moto G such as different processor, Turbo quick charge support and IP67 rating for water and dust resistance. 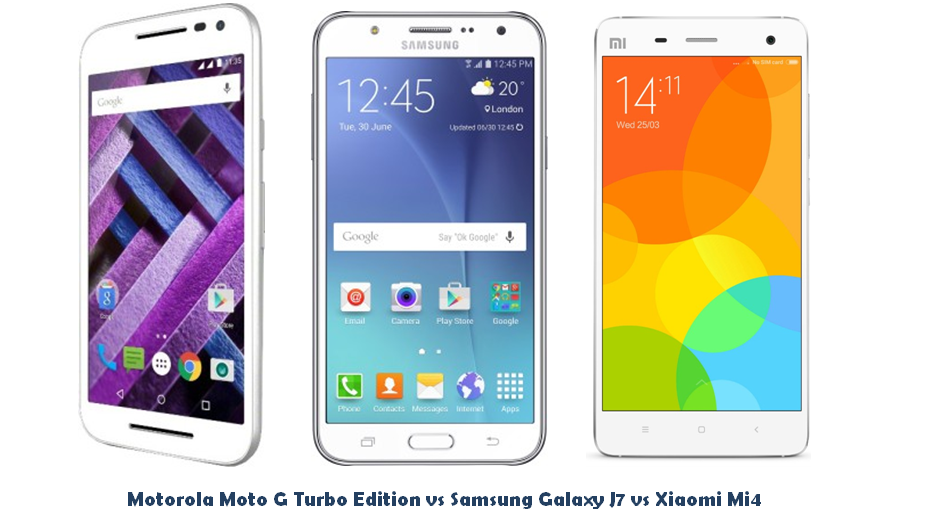 The Moto G Turbo Edition is backed up by a 2470mAh battery with TurboPower charger support that gives 6 hours of power in just 15 minutes of charging. The Samsung Galaxy J7 and Xiaomi Mi4 are fueled by 3000mAh and 3080mAh batteries respectively. Xiaomi Mi4 supports Quick Charge 2.0.

Moto G Turbo and Galaxy J7 again have a tie in this round. They offer dual SIM support, 4G LTE, Wi-Fi and Bluetooth as connectivity options. Xiaomi Mi4 comes with single SIM support and 3G connectivity.

Motorola Moto G Turbo and Samsung Galaxy J7 are closely matched in specifications. Both share similar specifications except a few differences such as Moto G Turbo comes with IP67 rating and offers more RAM while Galaxy J7 is fueled by a larger battery and supports more expandable storage. Xiaomi Mi4 on the other hand, comes with better display resolution, massive battery, better front facing camera. There are few areas where Xiaomi Mi4 disappoints us a bit. It comes with single SIM support, does not support 4G LTE and runs Android 4.4 KitKat which is rather dated considering that Android Lollipop and Marshmallow have already been rolled out.

Which handset among Motorola Moto G Turbo Edition vs Samsung Galaxy J7 vs Xiaomi Mi 4 do you think is better? Share your views with us in the comments section below.