Nokia India has launched the Nokia Lumia 1520 in India at a price of Rs. 46,999. (Buy Now At Special Discounted Price for limited time only).

As per Nokia India officials, the Lumia 1320 will also be launched in India soon.

Nokia unveiled two new windows phone at the Nokia World event held in Abu Dhabi. Both phones feature 6 inch displays and Gorilla Glass. Both phones are running Microsoft’s latest operating system windows phone 8 with latest software update called” Windows Black”. The other phones available today will get this update in early 2014, as Microsoft starts rolling update that depends on your location ,you will get some new features too that are already pre installed on these two devices.  The Nokia Lumia 1520 is higher end smartphone with quad core processor that will cost around USD 749 in International market and Nokia Lumia 1320 is affordable windows phone with 6 inch 720P LCD display, powered by dual core Qualcomm Snapdragon processor and it is priced around USD 339 in International  market. Nokia said that Nokia Lumia 1320 will be available in early 2014 in India. And some most exiting features of Nokia Lumia 1520 is apps, it comes with apps like Nokia Storyteller, Nokia Beamer.

“Purity was one of the main drivers in the creation of this device, along with understanding the scale available in the large screen. We aimed to create a device that feels thin and comfortable in the hand: it’s only 8.7mm deep.”, Ilkka Husgafvel, the lead industrial designer for the Lumia 1520.

Like Lumia 1520, it don’t have full HD support, it comes with 720P display. It has dual core Qualcomm Snapdragon processor with 1 GB RAM and 8GB of internal storage. Like Lumia 1520 it also comes with 7GB cloud storage from SkyDrive. And also you can add up to 64GB memory card to it. It has only 5 MP auto focus camera with Led flash and a VGA camera inn front for video calling. But the main camera can record up to 1080 pixels @ 30fps. 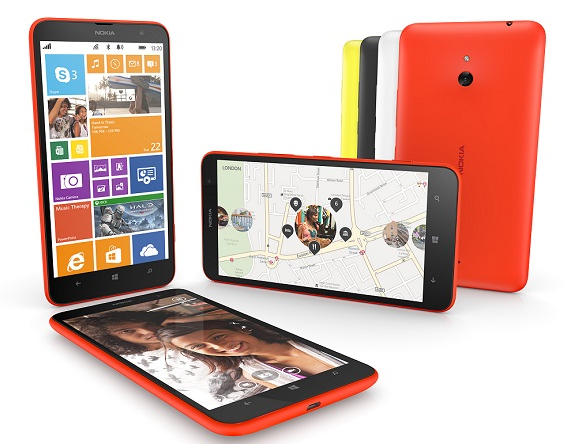