The Oppo Find 7 was released in March this year. And now the device goes on sale in China and the flagship smartphone from Oppo will start shipping from 29 May. Right now one can pre-order this device. The company also said that it will be available in India by mid 2014 means we can expect the availability of this device from June this year. In our detailed post we have already talked about the 50-megapixel camera of this device that is the unique feature of this device. The smartphone has a 13-megapixel rear shooter at back, but with the sort of some trick from Oppo the images took by this device looks like a 50-megapixel image. The another good feature of this device, its charging capacity. The smartphone is packed with 3000mAh battery with VOOC fast charging technology which Oppo claims that with this technology one can charge this smartphone up to 75% in 30 minutes. 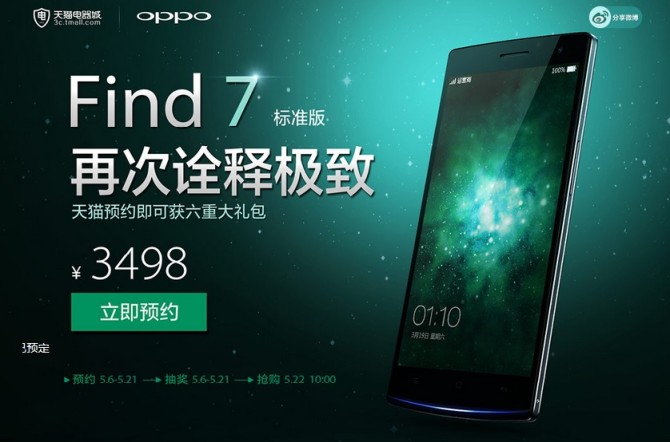 The Oppo Find 7 available in midnight black and white colors and is priced at 3498 Chinese Yuan which roughly translates in Rupees 34,450 approximately.

If this device is going to available at price around 35,000 in Indian market. Then this device will compete with Samsung Galaxy Note 3 Neo, Lenovo Vibe Z and Sony Xperia Z1 Compact. These all devices have 2GB RAM on board while Oppo Find 7 has 3GB RAM on board. Samsung Galaxy Note 3 Neo with Samsung premium apps and stylus, its looks lucrative deal at this price point with same screen size ,same battery but has 8-megapixel camera on board. One can also consider BlackBerry Z30 against it in the price term.