Samsung has been a pioneer in developing smartphone and tablets. They has excelled in terms of sales not only in India but different parts of the world. Extending it’s tablet portfolio, Samsung has announced four new products in their NotePRO and TabPRO series of smart devices. Samsung has unveiled the Galaxy NotePRO (12.2-inch), Galaxy TabPRO 12.2-inch, Galaxy TabPRO 10.1-inch and Galaxy TabPRO 8.4-inch in the big screen line-up distinguishing on the size and specifications and even on the use case. 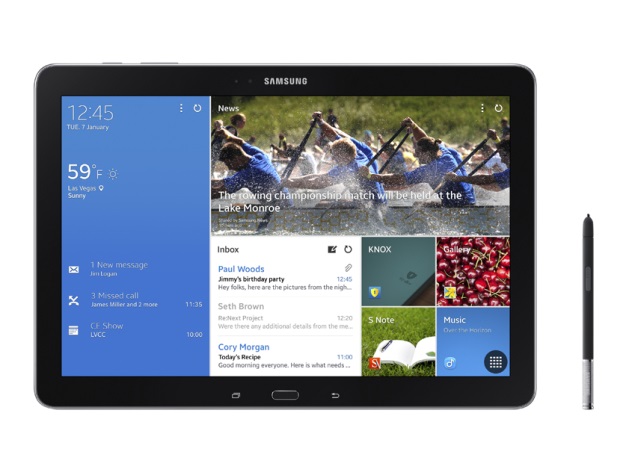 Starting with the Samsung Galaxy NotePRO, you might remember the Note 10.1 which was developed for people who don’t just wish to use their tablet as a tablet. This NotePRO has been aimed for them along with others who wish to enjoy the S-PEN features because it’s the Note series which comes with the S-PEN. The Galaxy NotePRO is a 12.2-inch Android tablet running the latest version of Android which is 4.4 aka KitKat. The tablet measures 295.6x204x7.95mm and weigh 750 grams for the Wi-Fi model and 753 grams for 3G/LTE model. It features a 12.2-inch WQXGA (2560×1600) ‘Super Clear’ LCD display which is powered by Exynos 5 Octa processor within for the Wi-Fi and 3G model, whereas the LTE variant by a 2.3GHz quad-core Snapdragon 800 chipset.

It comes paired with 3GB of RAM and includes 32GB and 64GB inbuilt storage models depending upon the price. Both of them support an additional 64GB expandable storage via microSD card so capacity is not an issue. The tablet features a 8-megapixel rear autofocus camera with an LED flash and a 2-megapixel front-facing camera. The Galaxy NotePRO includes Wi-Fi, USB 3.0, and Bluetooth on the connectivity side and packs a large 9,500mAh battery. 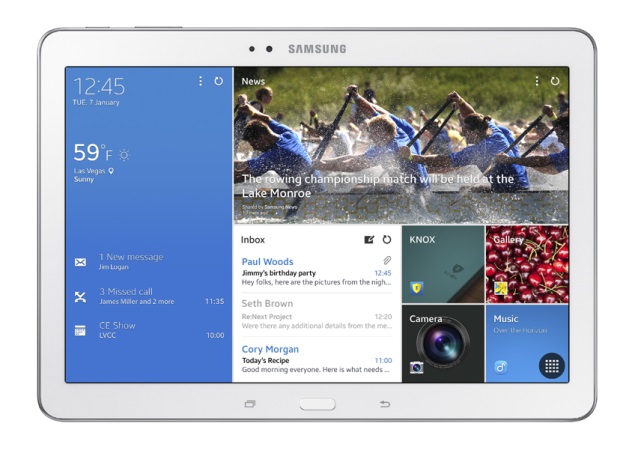 The Galaxy TabPRO comes in three different variants depending upon their screen sizes which are 12.2-inches, 10.1-inches and 8.4-inches, all having different technical specifications and pricing.

The Galaxy TabPRO 12.2-inch variant features the same specifications as of the NotePRO 12.2-inch but missing out the S-PEN features. The Galaxy TabPRO 10.1 also runs Android 4.4 KitKat as the mobile operating system and it should after all it’s 2014 and any device launching this year below KitKat should really consider the fact how quickly Android versions get staled.

On the technical front, it sports a 10.1-inch WQXGA (2560×1600 pixel resolution) Super clear LCD display. It is powered by an Exynos 5 Octa processor for the Wi-Fi model and a 2.3GHz quad-core Snapdragon 800 chipset for the LTE variant. It comes paired with 2GB of RAM and includes 32GB and 64GB inbuilt storage variants, with an additional 64GB expandable storage via microSD card. The Galaxy TabPRO 10.1 comes with an 8-megapixel rear autofocus camera with an LED flash and a 2-megapixel front-facing camera packing a 8220mAh battery. Samsung has not revealed pricing for any of the tablets in the Galaxy NotePRO and TabPRO line up, but it has been announced that the newly launched Android tablets will be available starting from Q1, 2014.