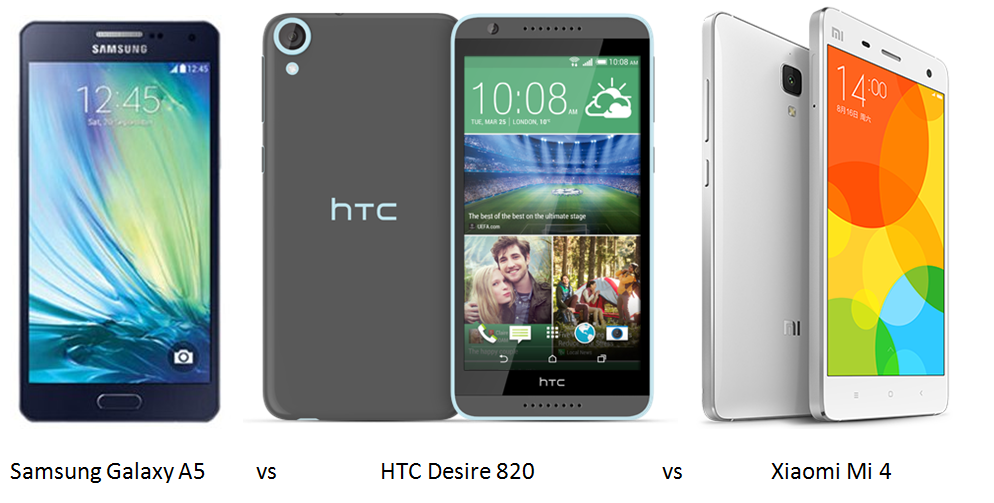 Specifications and Features Comparison: Samsung Galaxy A5 vs HTC Desire 820 vs Xiaomi Mi 4

The Samsung Galaxy A5 flaunts its impressive metal casing. It is the thinnest phone from Samsung till date with thickness of mere 6.7 mm. The phone looks aesthetically attractive, flaunting its plastic rear encased in a metal frame. HTC desire on the other hand misses out on metal body. Xiaomi Mi 4 flaunts its outstanding looks with stainless steel metal frame.

All the devices run on Android 4.4 KitKat operating system. Samsung A5 features TouchWiz UI on the top, Desire 820 features HTC Sense UI while Xiaomi Mi 4’s operating system is based on MIUI.

All the devices have a tie in rear camera. All the smartphones sport 13 mega pixel primary camera with Auto Focus and LED flash. HTC 820 and Xiaomi Note further sport a 8 mega pixel secondary camera and Galaxy A5 sports a 5 mega pixel front facing camera.

Connectivity options like Wi-Fi and Bluetooth are supported by all these devices. Samsung Galaxy A5 and Desire 820 support 4G LTE as well while it is not yet sure whether 4G variant of Mi 4 will be launched in India or not.

Samsung Galaxy A5 is priced the highest at Rs. 25, 500, followed by HTC Desire 820 which is priced at Rs. 22,522. The pricing details of Xiaomi Mi 4 have not been revealed yet while we expect it to be priced around Rs. 20,000 which makes it the device with the lowest price among the three smartphones.

In addition to a stable configuration, Desire 820 comes equipped with dual front speakers powered by BoomSound along with integrated amplifiers and is priced lower than Samsung Galaxy A5 but Desire 820 misses out on metal body. Samsung A5 on the other hand flaunts its metallic body and slim design with 6.7 mm thickness but is priced quite higher.Xiaomi Mi 4 certainly looks like a more powerful phone with rich configuration, yet all will depend on the pricing of the device which is yet to be announced. If launched within sub-Rs. 20,000 range, Xiaomi Mi 4 will prove to give heated competition to Samsung Galaxy A5.

What do you think? Which smartphone is better, the Samsung Galaxy A5 , HTC Desire 820 or Xiaomi Mi4? Lets us know in the comments below.