Samsung is reportedly working on the successor of Galaxy J7 2016, called the Samsung Galaxy J7 2017. The device was spotted on benchmarking website GFXBench, earlier this month. Now a press render of the of the smartphone has surfaced online. Leakster @evleaks has posted a press image of the Galaxy J7 2017 which looks similar to the 2016 version from the front. The rear however, has some changes. Below the display, it features a home button sandwiched between two touch capacitive buttons. On the rear, it gets a horizontal strip housing the camera module. The leakster reveals that the phone will be launched on Verizon as the Galaxy J7 V and Tracfone as the J7 Sky Pro. In other countries, it will launch as Galaxy J7 2017.

There is no word yet on price and availability of the Samsung Galaxy J7 2017. We expect Samsung to officially launch the smartphone soon. Stay tuned with us for more developments on this story!

The Galaxy J7 2017 has been spotted on benchmarking website GFXBench that reveals its key specifications and features. Scroll down for more details. As per GFXBench, the Galaxy J7 2017 will pack an octa-core Exynos 7870 processor clocked at 1.5GHz paired with Mali-T830 GPU. On the front, it will feature a 5.5-inch HD display with a resolution of 1280×720 pixels. The smartphone will house 2GB of RAM and 16GB of internal  memory. On the camera front, the phone will sport an 8 mega pixel rear camera. There will also be a 5 mega pixel front snapper for capturing selfies and making video calls. As for software, it will run Android 7.0 Nougat operating system. There is no word on battery capacity of the smartphone as of now. More details are likely to be announced in the coming days. 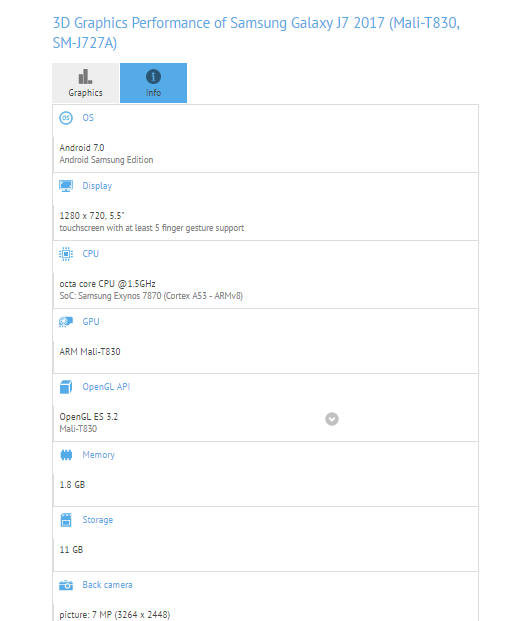 The Samsung Galaxy J7 2016, on the other hand, comes with 1.6GHz octa-core Exynos 7870 processor paired with 2GB of RAM. It gets a 5.5-inch HD Super AMOLED display with 1280×720 pixels resolution. Other specifications include 2GB of RAM, 16GB of internal memory, 13 mega pixel rear camera, 5 mega pixel front camera and a 3000mAh battery. The phone also supports NFC and comes with an S Bike mode that turns the phone into a bikers phone to avoid distraction while riding bike.