Samsung India has sent out media invites for an event scheduled on October 14, 2015 in Gurgaon. The invite sent by the company does not give any hint about the product, but looking at what the invite reads, ‘The next level of innovation is here’, Samsung is expected to announce the Gear S2 smartwatch for the Indian market.

As for specifications, it packs a 1GHz dual-core processor paired with 512MB of RAM. On software front, the device runs Tizen based wearable platform. It features a 1.2-inch Super AMOLED circular display with 360×360 pixels resolution and a rotating bezel. For storage purpose, it comes with 4GB of internal memory and is backed up by a 250mAh battery. It features Home and Back buttons and is IP67 certified for resistance against dust and water. Connectivity options include Wi-Fi 802.11 b/g/n, Bluetooth 4.1 and NFC. 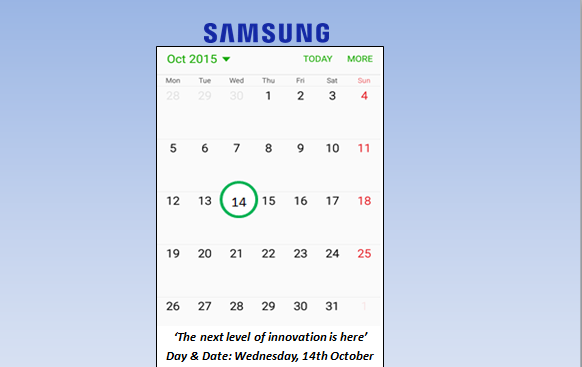 While we expect that Samsung will launch the Gear S2 smartwatch, there is a possibility that the company might launch a different product altogether. Recent visits of Samsung Galaxy Grand On and Galaxy Mega On to TENAA hints that the company could announce its O series at the upcoming launch event in India.

More information will be revealed during the launch event on October 14, 2015. Stay tuned with us for more developments on this story!