Yu Televentures has launched its latest flagship smartphone, called the Yu Yunicorn. It is priced at Rs. 13,499 and will be available to buy at a special price of Rs. 12,999 for the first month. It will compete with the likes of Xiaomi Redmi Note 3 and Moto G4 Plus which lie in the same price segment. In this post, we have pitted the three smartphones against each other to see how they fare. Read on to find Yu Yunicorn vs Xiaomi Redmi Note 3 vs Moto G4 Plus comparison with video. 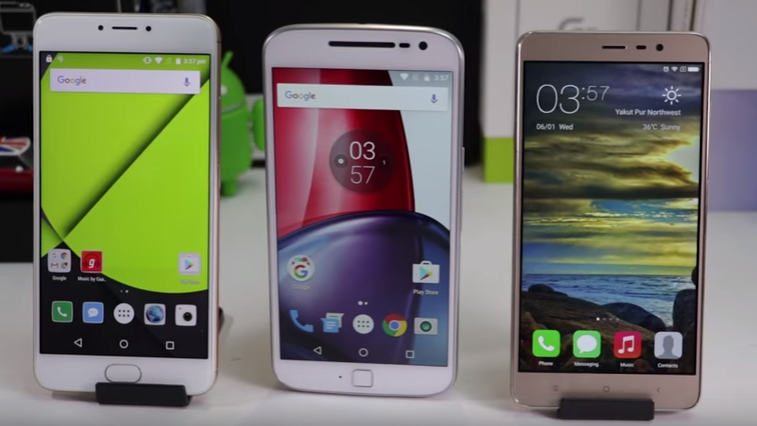 Yu Yunicorn and Redmi Note 3 both flaunt their all metal design. They feature stunning metal design with brushed aluminium finish. Compared to Redmi Note 3, the Yunicorn is flatter on the rear. Redmi Note 3 has slightly more curved rear and rounded edges. The Moto G4 Plus on the other hand, features plastic body with rounded frame and a textured back cover that offers good grip

So, if we had to pick one out of these three, based on aesthetics, we’d go for the Xiaomi Redmi Note 3 or Yu Yunicorn due to their premium metal design. If you are a fan of plastic body, then you can go for Moto G4 Plus.

All the three smartphones feature 5.5-inch full HD displays with 1080p resolution. The Moto G4 comes with Gorilla Glass 3 protection against scratches while Yunicorn comes with 2.5D glass. The displays of all the three smartphones are bright and sharp with good viewing angles. The display of Redmi Note 3 is more vibrant but Moto G4 Plus has better sunlight legibility  compared to Redmi Note 3 and Yunicorn.

Overall, Redmi Note 3 has a better display followed by Moto G4 Plus and Yu Yunicorn which fight neck to neck.

The Moto G4 Plus and Redmi Note 3 sport a 16 mega pixel camera on the rear with dual LED flash and PDAF. The Moto G4 Plus also comes with laser assisted autofocus . The Yunicorn comes with a 13 mega pixel primary camera. All the three phones sport a 5 mega pixel front facing camera. Both Moto G4 and Redmi Note 3 take excellent shots in well-lit and low-light conditions. Although the rear camera resolution of Yu Yunicorn is lower than its competitors, yet the quality of images taken with it is very good.

The Moto G4 focuses very quickly and accurately and the credit goes to the two auto focussing techniques that it equips. Overall the Moto G4 Plus has an edge when it comes to the camera department, with the Redmi Note 3 taking the second place.

Moto G4 Plus and Redmi Note 3 come in two variants based on RAM and storage: one with 2GB RAM and 16GB storage while other variant packs 3GB RAM RAM and 32GB storage. Both variants of these phones support expandable storage via microSD card. The Yu Yunicorn houses 32GB of internal memory which can be expanded further using micoSD card.

On testing these phones on AnTuTu benchmarks, we got scores of around 71000 for Redmi Note 3 and 45000 for Moto G4 Plus and 34000 for Yu Yunicorn. All three phones offer smooth gaming and multitasking experience but Yu Yunicorn disappoints us a bit. Despite packing Helio P10 chipset and 4GB of RAM, it doesn’t perform the way you would expect from it. Performance of Moto G4 Plus is also moderate and it gets slightly warm while playing graphic extensive games. So, when it comes to the power packed in these three devices, the Redmi Note 3 definitely has an edge, with Yunicorn taking the second position.

Interfaces of all three smartphones are clean and user friendly. While Moto G4 Plus offers features like the Moto Display, the Redmi Note 3 offers tons of themes and features to customise the look of the phone. The Yunicorn comes pre-loaded with a software service called Around Yu 2.0 that allows users to conveniently explore and access services ranging from wallet, trains, flights, cabs, hotels, recharge and more without downloading any third party app. All the three phones support USB OTG. .

The Xiaomi Redmi Note 3 and Yu Yunicorn are backed up by massive 4000mAh battery followed by while Moto G4 Plus with a 3000mAh battery. The Moto G4 Plus comes with a Turbo charger which is said to offer 6 hours of power with 15 minutes of charging.