Coolpad, another Chinese smartphone manufacturer entered the Indian market last month with the launch of Dazen 1 and Dazen X7 smartphones under its Dazen brand. The Dazen 1 was originally introduced at Rs.6,999 however now the company has announced price drop for the handset. It is now available to buy from Snapdeal for Rs.5,999. The Dazen 1 will compete with the likes of Yu Yuphoria and Xiaomi Redmi 2 which carry the price tag of Rs. 6,999.

Thus in this post, we have compared Coolpad Dazen 1 vs Yu Yuphoria vs Xiaomi Redmi 2 to ascertain how they fare. Read on to find out how these three smartphones compare with each other in specs and features. 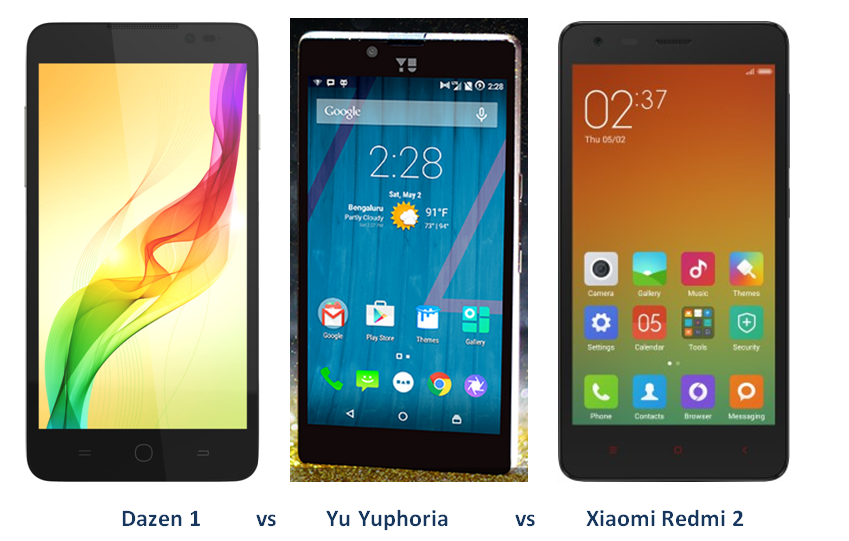 All the three phones are powered by quad-core Qualcomm Snapdragon processor clocked at 1.2GHz paired with Adreno 306 GPU. The Dazen 1 and Yu Yuphoria pack 2GB of RAM while Xiaomi Redmi 2 lags behind with 1GB of RAM.

The Yu Yuphoria and Xiaomi Redmi 2 are priced at Rs. 6,999. The Coolpad Dazen 1 on the other hand has recently received  a price drop. It is now available to buy from Snapdeal for Rs. 5,999 instead of its original price of Rs. 6,999.

Although specifications of all the three phones are closely match, yet the Xiaomi Redmi 2 lags behind on many front like display size, front camera, battery capacity and RAM. The Yu Yuphoria is a tough competitor for Coolpad Dazen 1. Specifications of Dazen 1 and Yuphoria are almost similar expect that the former comes with more battery capacity and lower price while latter with more inbuilt storage and higher price. Thus, the Dazen 1 will certainly give its rivals run for their money in the Indian smartphone market.

Which handset among Coolpad Dazen 1 vs Yu Yuphoria vs Xiaomi Redmi 2 do you think is better? Share your views with us in the comments below!