While Microsoft Windows 10 is set to launch by the end of July 2015, new report from Neowin has revealed that the Windows 10 Mobile will be released in September. With a difference of nearly two months, mobile users will have to wait download Windows 10 Mobile on their devices.

According to the leaked slide, both versions of Windows 10 Mobile- consumer and entreprise will be available “late next quarter”, which hints that the Windows 10 Mobile could arrive by the end of September. Microsoft has already released technical preview of Windows 10 for phones. Read on to find features and simple steps to download Microsoft Windows 10 Technical Preview on your phone. 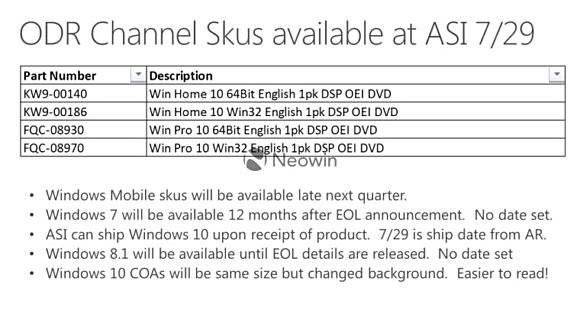 Microsoft has launched the Microsoft Windows 10 Technical Preview for Phones. It is available to download now on select Windows phones through Windows Insider Program. The devices which will support the first Windows 10 technical build include Lumia 630, 635, 636, 638, 730 and 830 while other Windows phone users will have to wait for some more time to download the technical preview of Windows 10 on their devices. Since Windows 10 build for phones is based on the same platform as that of Windows 10 technical preview for PC’s, expect it to function in nearly the same manner.

These are the features which have been embedded in the first build while the upcoming builds will come with more innovative features like Universal Office apps for Word, Excel and PowerPoint which work on all Windows 10 based phones, tablets and PCs. Another feature is new Mail and Calendar Universal Apps from the Outlook team in Office. The upcoming build will also come with IP-based messaging from Skype.

How To Get Microsoft Windows 10 Technical Preview On Your Phone

You will receive the updates automatically as soon as they will be rolled out for users. In case you want to go back to the original operating system on your device, you can do that as well.

Did you download the Windows 10 technical preview on your Windows phone? How was your experience? Share your views with us in the comments below. Stay tuned for more updates!

Also Read: How To Get Windows 10 Technical Preview On Your PC