Honor, a brand under Huawei has launched its Honor 6 Plus smartphone in India. The handset is priced at Rs. 26,499 and will go on sale in April 2015 exclusively through Flipkart. The Honor 6 Plus packs high-end specs, plethora of attractive features and premium looks. In the Indian smartphone market, it will compete with the likes of HTC One M8 and OnePlus One. In this post, we have pitted Honor 6 Plus against its rivals. Read on to find out how Huawei Honor 6 Plus vs OnePlus One vs HTC One M8 compare with each other in specifications, features and price. 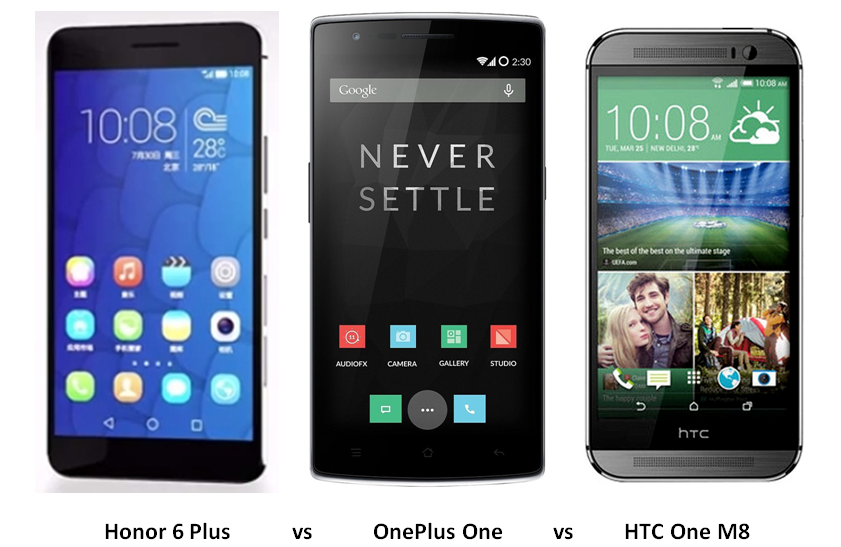 Features and Specifications Comparison: Huawei Honor 6 Plus vs OnePlus One vs HTC One M8

Honor 6 Plus is powered by octa-core Hisilicon Kirin 925 processor coupled with 3 GB of RAM. OnePlus One and HTC One M8 pack quad-core Qualcomm Snapdragon 801 processors accompanied with 3 GB and 2 GB of RAM respectively.

Honor 6 Plus and One M8 run Android 4.4 KitKat with Emotion 3.0 UI and HTC Sense UI 6 on the top respectively. OnePlus One runs on CyanogenMod 11S based Android 4.4.2 KitKat operating system.

Honor 6 Plus and OnePlus One flaunt a 5.5 inch display while One M8 features a 5 inch display with 441 ppi. Display resolution of all the three handsets is 1920 x 1080 pixel.

There is 32 GB of inbuilt memory on Honor 6 Plus, 64 GB on OnePlus One and 16 GB on HTC One M8. Honor 6 Plus and One M8 come with further expandability up to 128 GB using microSD card. OnePlus lacks microSD card support.

Honor 6 Plus packs a monstrous 3600 mAh battery which is enough to last for a day. It also features two way charging which enables users to charge other devices using phone’s battery.  OnePlus is fueled by a 3100 mAh battery and One M8 packs a 2600 mAh battery.

Honor 6 Plus is sleekest of all with 7.5 mm thickness followed by OnePlus One with 8.9 mm and HTC One M8 with 9.4 mm thickness. One M8 is lightest and weighs 160 grams. OnePlus One and Honor 6 weigh 162 and 165 grams respectively.

OnePlus One is priced lower than Honor 6 Plus but it lacks microSD card support and packs a comparatively smaller battery. HTC One M8 on the other hand carries a considerably higher price tag and lags in RAM, battery and display size. Honor 6 Plus is a combination of premium design, top notch features, and high end specs. The highlight of 6 Plus however is its dual 8 mega pixel camera which captures stunning images with superior quality. The new entrant Honor 6 Plus is surely going to give its rivals run for their money.

Which handset among Huawei Honor 6 Plus vs OnePlus One vs HTC One M8 do you think is better? Share your views in comments below.

Stay tuned with us for more News, Comparisons and updates from gadget world.