Earlier, we informed you about Micromax Canvas Elanza , a dual SIM smartphone from Micromax, was listed earlier on Snapdeal and went for sale from today at price around INR 9,400. Now another smartphone price under INR 10,000 is leaked online with 5-inch display and quad core processor. But the hero feature of this device is, its massive big battery of 4000mAh. That according to leaks can provide 13.5 hours of talk time and 400 hours of standby with a single charge. This is not the first smartphone with that big battery backup. We have seen Lenovo P780 previously with the same size of the battery. So now, Micromax has also joined the league of big battery line. Before Canvas power, Micromax also launched Micromax Canvas Juice that  have 3000mAh battery. 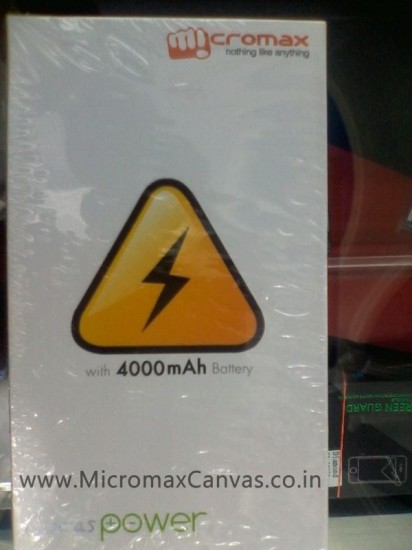 According to report, the Canvas power will come with 5-inch display. It will run on 1.3GHz quad core processor from Media Tek with 1GB RAM on board. There is 4GB internal storage, which can further expandable up to 32GB via a SD card.

The smartphone will come with a 5-megapixel auto focus camera at back with a LED Flash. There will be a VGA camera too at front for video calling. It will also come with Bluetooth, Wi-Fi and 2G, 3G. The expected price of Canvas Power is under INR 10,000. 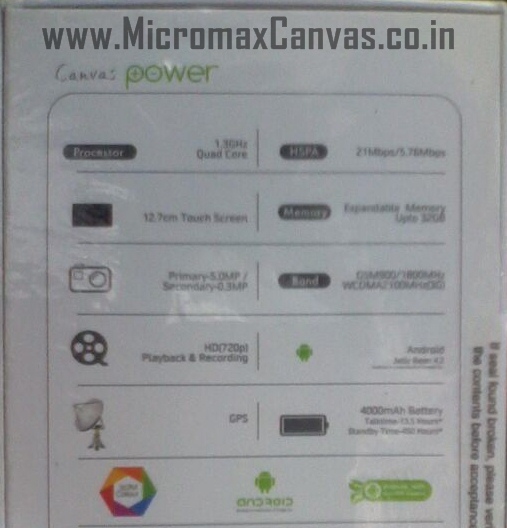