Micromax has introduced a new smartphone in its Canvas series, dubbed the Micromax Canvas Xpress 4G. The affordable phone supports 4G LTE connectivity and houses 2GB of RAM. Priced at Rs. 6,599, it will compete with the likes of  Xiaomi Redmi 2 Prime and Yu Yuphoria which are priced at Rs. 6,999 and share similar specifications.

If you are not able to decide which smartphone to buy, we will help you make an informed decision. Read on to find out how Micromax Canvas Xpress 4G vs Xiaomi Redmi 2 Prime vs Yu Yuphoria compare with each other in terms of specifications and features. 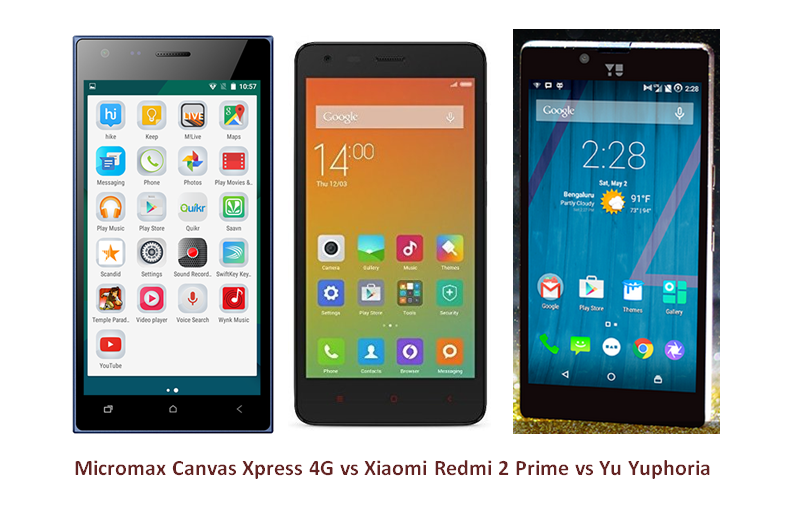 While both Xiaomi Redmi 2 Prime and Yu Yuphoria are powered by a quad-core Qualcomm Snapdragon 410 chipset clocked at 1.2GHz, the Canvas Xpress 4G comes with a 1.0GHz quad-core MediaTek MTK6735P processor. All the three smartphones pack 2GB of RAM.

This department is a tie since all three phones house 16GB of internal memeory which can be expanded via microSD card.

The Yu Yuphoria is fueled by a larger 2230mAh battery, followed by Redmi 2 Prime with 2200mAh battery and Canvas Xpress 4G with 2000mAh battery.

If we ignore the pricing, then Yu Yuphoria has a slight upper hand in specifications. It has a larger battery and  better front facing camera. If we consider price, then apparently the Canvas Xpress 4G is the winner since it is equally capable as its rivals and is available at lower price than the other two smartphones.

Which handset among Micromax Canvas Xpress 4G vs Xiaomi Redmi 2 Prime vs Yu Yuphoria do you think is better? Share your views with us in the comments section below!