Xiaomi took the wraps off its first made in India smartphone, dubbed the Xiaomi Redmi 2 Prime earlier this week. The feature-rich budget smartphone is priced at Rs. 6,999. The Redmi 2 Prime is available to buy from Mi.com and online retailers including Flipkart, Amazon, Snapdeal in open sale. 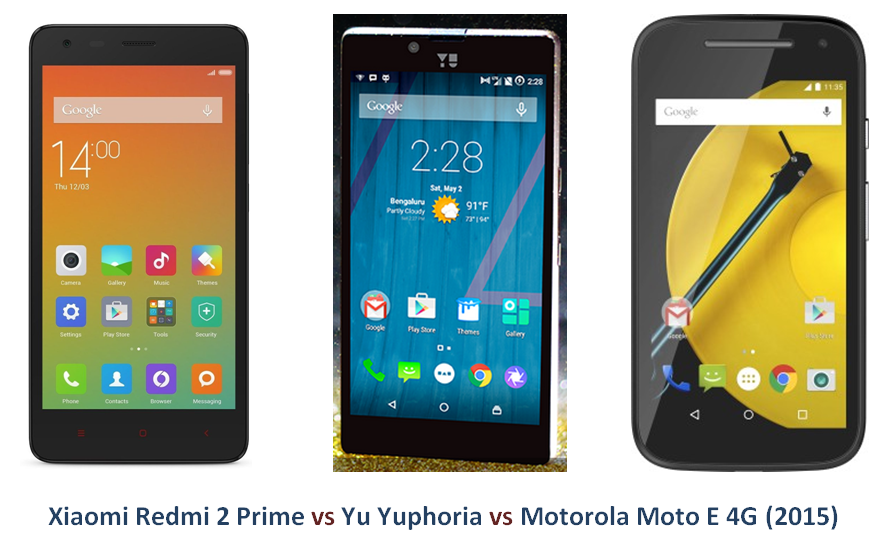 All the three handsets are powered by a quad-core Qualcomm Snapdragon 410 processor clocked at 1.2GHz. The Redmi 2 Prime and Yu Yuphoria pack 2GB of RAM while Moto E 4G (gen 2) comes with 1GB of RAM.

Motorola Moto E 4G (2015) is the winner in this department with 2390mAh battery followed by Yu Yuphoria with 2230mAh battery and Redmi 2 Prime with 2200mAh battery.

Connectivity options on all the three smartphones include dual SIM support, 4G LTE, Wi-Fi and Bluetooth.

Which handset among Xiaomi Redmi 2 Prime vs Yu Yuphoria vs Motorola Moto E 4G (2015) do you think is better? Share your views with us in the comments section below.