Lenovo-owned Motorola has finally launched its new Moto G5S Plus smartphone in the Indian market. The new handset offers a nice combination of dual cameras and stock Android operating system. It is one of the few smartphones with dual rear cameras in the mid-range segment. How does it compare to other devices in the same segment? Let’s do a quick comparison and find out. Read more to find about Moto G5S Plus Vs Honor 6X – Which Phone is Better? 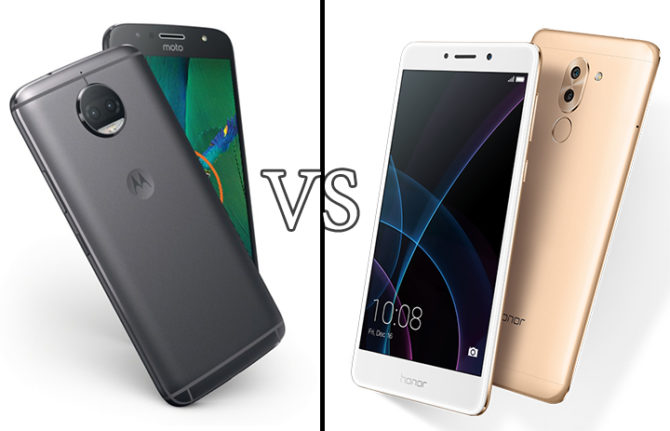 The Moto G5S Plus is powered by a 2.0GHz octa-core Qualcomm Snapdragon 625 processor, similar to the Moto G5 Plus. On the other hand, Honor 6X comes with Huawei’s in-house Kirin 655 processor (2.1GHz octa-core). Both devices are supported by 4GB RAM and 64GB internal storage, which can be expanded via a microSD card (up to 256GB).

The Moto G5S Plus is backed by a 3000mAh battery with Turbocharging. On the other hand, the Honor 6X comes with a 3340 mAh battery. Both devices come with 4G VoLTE, WiFi, Bluetooth, Dual-SIM, 3.5mm audio jack and micro USB port as connectivity options.

Both smartphones feature dual camera setup in the back. The Moto G5s Plus camera setup (horizontally placed) uses two 13-megapixel sensors with f/2.0 aperture. There is also an 8-megapixel wide-angle front camera with LED flash and a new panoramic mode.

The Honor 6X camera setup combines a 12-megapixel sensor and a 2-megapixel sensor. There is also an 8-megapixel front camera for selfies. In this segment, the Moto G5S Plus looks like a better option on paper. However, we will have to wait for results in real world situations to get better results.

The G5S Plus sports a fingerprint sensor in the home button. In Honor 6X, the fingerprint scanner is placed on the back panel. Both devices feature a 5.5-inch display with Full HD resolution (1920 x 1080 pixels).

Both smartphones offer very similar specs and features. The Moto G5s Plus gets an upper hand in the camera department and operating system. However, the Honor 6X comes with a better price tag. If you are not looking for a stock Android experience, the Honor 6X seems like a better choice as its camera offers decent results. Which of the two would you go for? Let us know in the comments section below.