Samsung has launched the much awaited Galaxy Note 8 smartphone. The new handset comes with top-of-the-line features like a 6.3-inch Infinity display, 6GB RAM, and a dual camera setup. It is also the most expensive smartphone in the Samsung Galaxy series. Another feature that differentiates it from other Samsung flagships is the S Pen Stylus. Let’s see how it compares with its siblings. Read more to find about Samsung Galaxy Note 8 Vs Galaxy S8 Plus Comparison – Which Phone is Better? 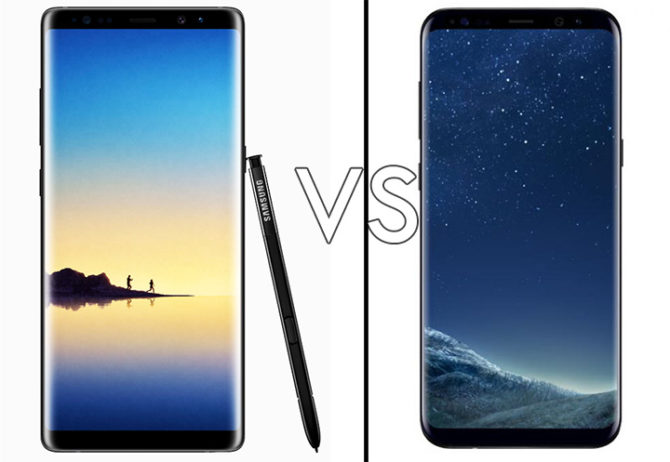 Both handsets sport an octa-core chipset (Snapdragon 835 engine in the US and an Exynos 8895 everywhere else). While the Samsung Galaxy S8 Plus is supported by 4GB RAM, the Galaxy Note 8 comes with huge 6GB RAM.

The Samsung Galaxy Note 8 is backed by a slightly smaller 3,300mAh battery compared to the 3,500mAh one on the Galaxy S8 Plus. The presence of S Pen and physical protection for battery might be the cause of this reduction.

The biggest difference between these two smartphones is the rear camera setup. The Samsung Galaxy Note 8 comes with a dual camera setup. It combines two 12-megapixel cameras (wide-angle lens with f/1.7 aperture, dual-pixel autofocus + telephoto lens with f/2.4 aperture, 2x Optical Zoom) with Dual OIS. Users will be able to capture nice bokeh and adjust the depth of field before or after taking it.

On the other hand, the Samsung Galaxy S8 Plus comes with a single 12-megapixel camera with f/1.7 aperture and optical image stabilization (OIS). It is one of the best smartphone cameras on the market.

Both phones feature an 8-megapixel front camera with f/1.7 aperture.

Also read: Samsung Galaxy Note 8 Is Here – All You Need To Know

Both devices sport a super-widescreen ‘Infinity Display’ with almost no bezels around them. However, the Note 8 features more pronounced curves compared to the S8 Plus. The Galaxy Note 8 sports a wide 6.3-inch Super AMOLED display with QHD+ (1,440 x 2,960 pixels) resolution and a pixel density of 521ppi. The Samsung Galaxy S8 Plus features a 6.2-inch Super AMOLED display with QHD+ resolution and 529 pixels per inch.

Both smartphones feature similar design elements including a curved glass back and a metal frame. However, the new phone is slightly bigger and more rectangular than the S8 Plus. It also includes an S Pen stylus. On the back, the Note 8 features a dual camera setup. Both phones are IP68 certified (dust and water resistant) and feature a fingerprint scanner.

Additionally, the Samsung Galaxy Note 8 also comes with an S Pen stylus, that allows you to draw and write on your handset.

On paper, the Samsung Galaxy Note 8 is not too different from the Galaxy S8 Plus. The brand-new handset features some cool improvements over its siblings including an extra camera, more RAM, and a wider display. We will have to wait and see how it performs in the real world situations. It remains to be seen how role does the reduction in battery size plays. At present, the Samsung Galaxy Note 8 offers the widest screen possible. If you don’t care about the S Pen, the Galaxy S8 Plus is a well-tested option. Which of the two flagship smartphones would you go for? Let us know in the comments section below.