While rumors were suggesting that Oppo is working on a new smartphone, the Chinese handset manufacturer has now officially confirmed that it is soon going to launch the Oppo Mirror 5s. The company has posted a teaser image on its official Facebook page which shows front and rear of the device.

The teaser image does not reveal specifications, pricing details or launch date of the phone, however thanks to rumors and leaks which have left nothing to imagination about innards of Oppo’s upcoming Mirror 5s. On design front, the device in the teased picture looks stylish with crystal cut design on the rear panel. 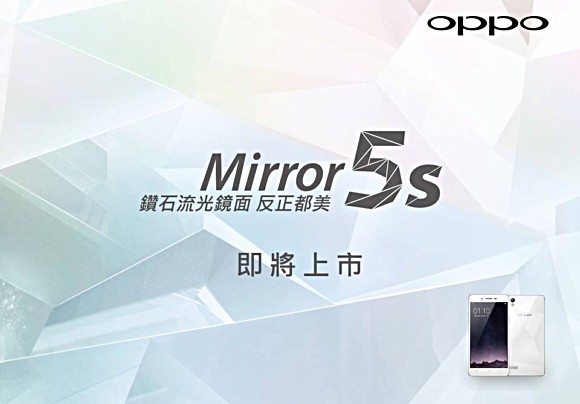 The Mirror 5s is said to be powered by a quad-core Qualcomm Snapdragon 410 processor clocked at 1.2GHz paired with 2GB of RAM. Running Android 5.1 Lollipop operating system wrapped under Oppo’s Color UI, it will feature a 5-inch display with 1280×720 pixels resolution. The smartphone will entail 16GB of inbuilt memory. On camera front, it will sport an 8 mega pixel camera on the rear and a 5 mega pixel front facing camera. It will be backed up by a 2420mAh battery.

While there is no word on exact pricing and availability of Oppo Mirror 5s, we expect it to be launched in the coming days. Leaks however suggest that it will be a mid ranged phone and will be launched on July 5, 2015.

We will update you as soon as more information about Mirros 5s will be made available. Stay tuned with us for more developments on this story!