Pantel technology’s collaboration with BSNL has resulted in quite a lot of budget tablets making their way to the Indian markets and the partnership has just resulted in another budget tablet being made available to the Indian consumers. Penta T-Pad WS707C is the name and it is a 7-inch budget tablet which comes with sim card for voice calling functionality and gets 2G support as well. And the device can be all yours for a price of Rs.7,999.

The budget tablet will run on the latest iteration of Android which is Android 4.1 Jelly Bean and the screen will have a resolution of 1024×600 pixels. The budget tablet will be powered by a 1 GHz Cortex A9 single core processor and the multi tasking abilities will be enhanced by the 1 GB DDR3 RAM present on board. A Mali 400 GPU will be taking care of your graphic intensive games and applications. Internal storage stands at 8GB with the option of expanding it to 32 GB being made available via a microSD card. 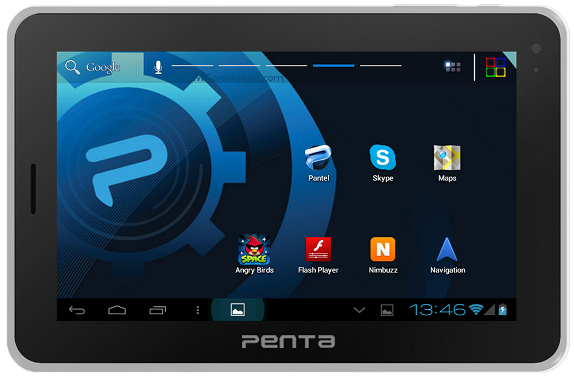 The budget tablet comes with a 2.0 MP camera at the rear for those occasional clicks and the front gets a VGA camera for video calling. At the launch of the tablet, Mr. Vijender Singh, MD Pantel Technologies stated, “As a pioneer in the Tablet PC industry, Pantel Technologies is proud to introduce the power packed Penta T-Pad WS707C. Endowed with superior specifications, Penta T-Pad WS707C is an EDGE-enabled device which personifies performance with superior connectivity at an affordable price.”

It gets Wi-Fi support and 3G accessibility via an external dongle as well with a HDMI port being made available as well. 3,000 mAH will be the capacity of the battery which according to us would last for around 4-5 hours in daily usage. The device will have to compete with the Acer Iconica B1 which comes at a similar price and since Acer is way more a reputed brand than Pantel, the device needs to be a great performer in real world conditions to have the upper hand over the Acer offering.