Realme is ready to launch a new smartphone in the Indian market. The new Realme U1 will be the first smartphone to come with MediaTek Helio P70 SoC. It is also being touted as ‘India’s selfie pro’ smartphone. The company claims that the upcoming handset will feature the ‘most powerful selfie camera ever.’ Read more to find about Realme U1 Price in India, Specifications, and Features 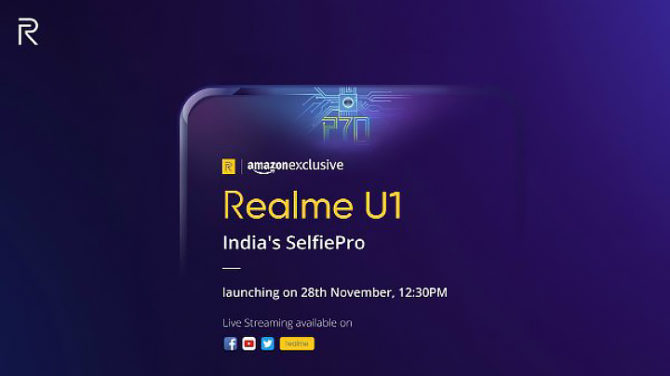 The Realme U1 will be launched in India on November 28 via Amazon.in. It has already been listed on the e-commerce platform. As of now, there is no information about the price of the upcoming device. However, it is likely to be priced under Rs 20,000.

Also read: Google Pixel 3 Lite To Come With 3.5mm Headphone Jack – All We Know So Far

The upcoming smartphone will be powered by the latest MediaTek Helio P70 processor. The new octa-core chipset (4 x 2.1GHz ARM Cortex-A73 cores + 4 x 2.0GHz ARM Cortex-A53 cores) was launched last month. It is based on TSMC’s 12nm FinFET process. It might be backed by up to 8GB RAM and 64GB/128GB internal storage.

The Chinese company claims that Helio P70 offers 13 percent performance boost over the Helio P60 SoC. The eights cores are available in a big.LITTLE architecture along with an ARM Mali-G72 MP3 GPU. Additionally, the new chipset is optimized to reduce frame-rate jitter and improve latency for touch controls/ display visuals.

The Realme U1 is listed on Amazon.in as a ‘selfie pro’ smartphone. The listing also claims that new handset will feature the ‘most powerful selfie camera ever’. However, the sensor resolution and aperture size of the front camera is still unknown. The MediaTek SoC supports up to a 32-megapixel single primary camera or a dual camera setup featuring 24-megapixel and 16-megapixel sensors.

As per recent teasers, the Realme U1 will be will feature a waterdrop-shaped display notch. It is tipped to come with a full HD+ display with a 19:9 aspect ratio.

The Realme U1 is set to come with several exciting features including the new Helio P70 processor and powerful selfie cam. The MediaTek processor will bring new improvements like a high-resolution depth engine, faster multi-frame noise reduction, and anti-blooming engine. The Android smartphone will feature a waterdrop-style display notch.

Recently, the company launched the Realme C1 in India at Rs 6,999 (introductory price). The new smartphone is powered by a 1.8 GHz octa-core Snapdragon 450 processor along with an Adreno 506 GPU and 2GB RAM. The 16GB internal storage can be further expanded via a dedicated microSD card slot (up to 256GB). It is backed by a large 4,230mAh battery.

We will have to wait till November 28 for more details. However, this page will be updated regularly. Bookmark this page to stay tuned.