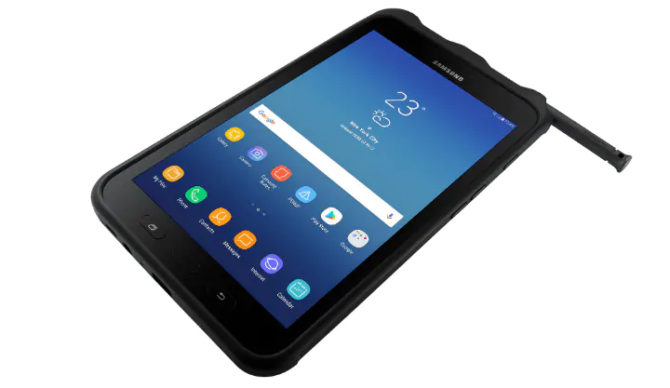 The new tablet is powered by an octa-core Exynos processor and 3GB RAM. The 16GB internal storage can be further expanded via a microSD card (up to 256GB). It is backed by a 4,450mAh battery.

The MIL-STD-840G certified build of the tablet can protect it against vibrations, accidental shocks, drops, rain, and dust. Additionally, it comes with IP68 certification (can survive up to 1.5-metre underwater for 30 minutes) and can also withstand extreme temperatures (storage minus 40-degree Celsius and operating minus 20-degree Celsius to 71-degree Celsius).

The Samsung Galaxy Tab Active 2 comes with an S Pen integration. An Enhanced Touch option allows the display to work even under rain or during a snowfall. There is also a Glove Mode. Additionally, the tablet comes with augmented reality (AR) capabilities.

Accessories include an anti-shock cover that further helps the tablet withstand accidental drops and shocks. A pogo pin connector can be used to easily attach a notebook or keyboard. It can also be used to connect and charge multiple devices at once.

The Knox 3.2 platform integration protects the tablet from hackers and cybercriminals. A Knox Configure also enables a large range of configuration options in wallpapers and boot screens. The rugged tablet also comes with a facial recognition feature and a fingerprint sensor.

Samsung claims that the Galaxy Tab Active 2 has a product lifecycle of more than three years. It is aimed at in-field professionals across sectors such as mining and refinery, manufacturing, and construction.