Xiaomi has launched its highly anticipated flagship device, Xiaomi Mi 4 smartphone in India. This device is priced at Rs. 19,999 and packs numerous impressive features, but it does comes with few disappointments for the buyers like absence of 4G support and non-expandable storage. If you are confused whether to buy Mi 4 or some other phone, then  this post will help you choose the best smartphone. In this post we have compared Xiaomi Mi 4 with its rivals in the Indian market namely, OnePlus One and Huawei Honor 6 . Read on to find how Xiaomi Mi 4 vs OnePlus One vs Huawei Honor 6 compare with each other in specifications and features. 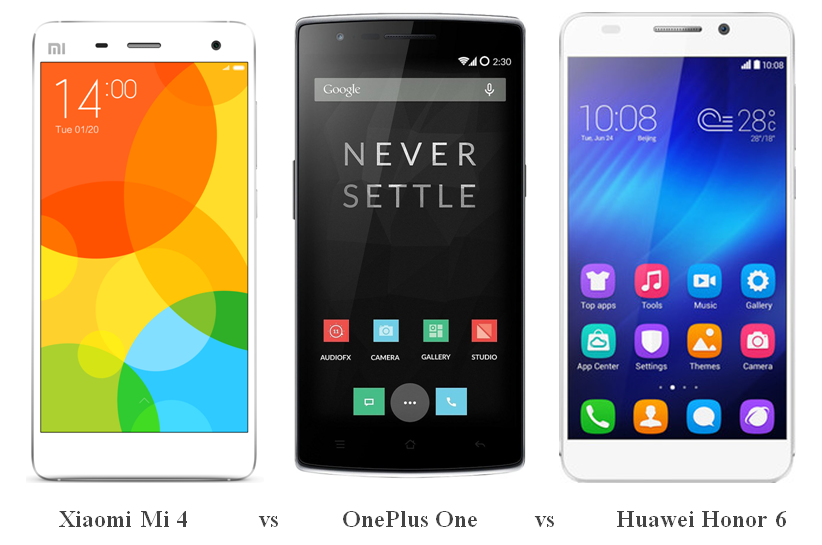 Specifications and Features Comparison: Xiaomi Mi 4 vs OnePlus One vs Huawei Honor 6

Mi 4 and OnePlus One both bear 8.9 mm thickness while Honor 6 is sleeker than the former two and features 7.5 mm thickness. Honor 6 being the lightest of all three weighs 130 grams, OnePlus One weighs heaviest at 162 grams. Xiaomi Mi 4 weighs 149 grams and boasts of its gorgeous metal casing.

The Mi 4 comes with little disappointment, it houses 16 GB of non expandable storage. OnePlus One entails 64 GB of in-built storage which is again non expandable. Honor 6 comes in two variants based on storage – 16 GB and 32 GB, both of which are expandable up to 64 GB via microSD card.

Battery capacity of these devices is nearly the same. Mi 4 packs a 3080 mAh battery while OnePlus One and Honor 6 are fueled by 3100 mAh  battery. On connectivity front, all these smartphones include Wi-Fi and Bluetooth connectivity while OnePlus One and Honor 6 offer 4G support and NFC as well in addition to Wi-Fi and Bluetooth.

Mi 4 and OnePlus are powered by quad-core Qualcomm Smapdragon 801 processor while Honor 6 runs on a different octa-core HiSilicon Kirin 920 processor altogether. Mi 4 comes with impressive metal casing, however it misses out on 4G support which is available in the other two devices. Mi 4 also comes with less non expandable internal storage as compared to the 64 GB storage of OnePlus and expandable storage of Huawei Honor 6.  OnePlus One flaunts its larger display, more internal storage and customizable CyanogenMod 11S based Android 4.4.2 KitKat operating system. Since these devices feature decent and similar high-end specs, Xiaomi Mi 4 seems to face tough time competing with these equally competent handsets in the Indian market.