Xiaomi finally took the wraps off its flagship smartphone Mi 4i yesterday at its global launch event in India. The Mi 4i is priced at Rs. 12,999 and will go on sale exclusively on Flipkart.com starting April 30 while registrations for the same are open now. As the name implies, Mi 4i is a cheaper variant of last years Xiaomi Mi 4 smartphone which reached Indian shores in January 2015. Another handset dubbed Yu Yureka features similar specifications as the Mi 4i. Thus, in this post, we have pitted Xiaomi Mi 4i vs Xiaomi Mi 4 vs Yu Yureka against each other to see how they compare with each other in terms of specifications, features and price. Read on to find out which smartphone wins the battle! 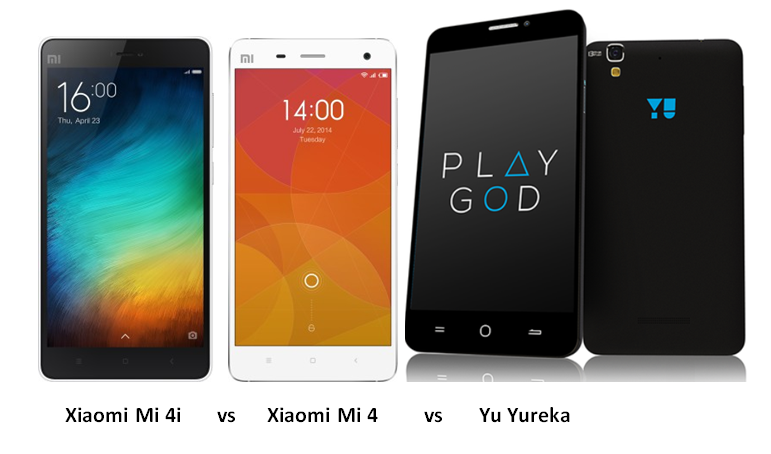 Features and Specifications Comparison: Xiaomi Mi 4i vs Xiaomi Mi 4 vs Yu Yureka

This round is tie between Xiaomi Mi 4i and Mi 4. Both devices feature a 5 inch Full HD display with Corning OGS glass, 1920×1080 pixel resolution and 441 ppi pixel density. The Yu Yureka packs a larger 5.5 inch HD display but it features lesser resolution and pixel density of 1280 x 720 pixel and 267 ppi respectively.

Xiaomi Mi 4i is lightest and sleekest with 130 grams weight and 7.8 mm thickness. Yu Yureka is the bulkiest in the lot with 155 grams of weight and measures 8.8 mm in thickness. Mi 4 weighs 149 grams and has thickness of 8.9 mm.

Yu Yureka offers a great package of features in sub-Rs.10,000 range with larger display and microSD card slot, however it lags behind in screen resolution, battery front and is also bulkier than the other two rivals in this comparison. Xiaomi Mi 4 flaunts better front facing camera and more RAM but at the same time it lacks 4G LTE support and is too pricey than its cheaper sibling and Yu Yureka. With Rs. 12,999 price tag, Xiaomi Mi 4i seems to be a fairly good steal since it packs a mighty configuration, mammoth battery and runs latest Android 5.0 operating system with MIUI 6.

Which handset among Xiaomi Mi 4i vs Xiaomi Mi 4 vs Yu Yureka do you think is better? Share your views with us in comments below!