Xiaomi has launched its new smartphone Redmi 2 in India, today at an event in New Delhi. The handset will go on sale starting 24th March 2015 via Flipkart however registrations will begin from 12th March. Redmi 2 is competitively priced at Rs. 6,999. In the Indian market, already flooded with a number of low cost smartphones, it will compete with the likes of Lenovo A6000 and Motorola Moto E (Gen 2) which fall in the same price segment. If you are confused about which phone is better, go through this post to decide which one is best for you. Read on to find how Xiaomi Redmi 2 vs Lenovo A6000 vs Moto E (Gen 2) compare with each other in specifications and features. 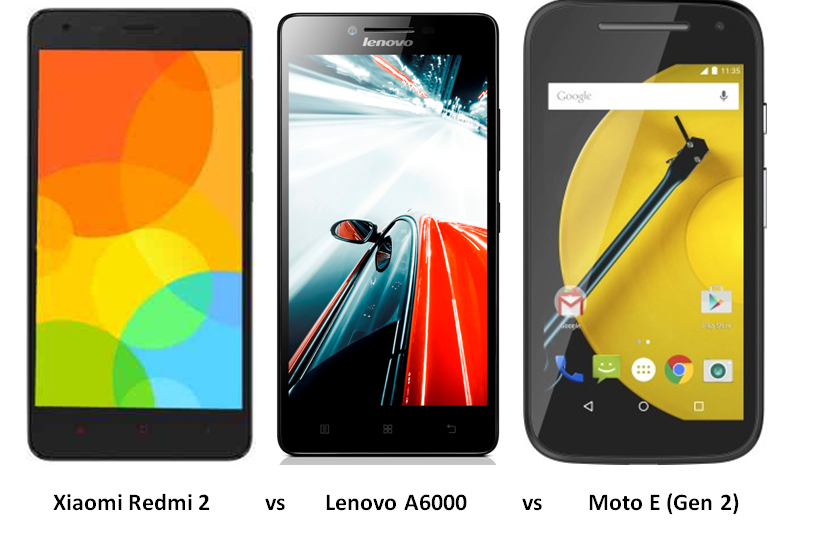 Specifications and Features Comparison: Xiaomi Redmi 2 vs Lenovo A6000 vs Moto E (Gen 2)

Xiaomi Redmi 2 and Lenovo A6000 run on Android 4.4 KitKat wrapped under MIUI 6 and Vibe 2.0 UI respectively. 2nd generation Moto E runs on Android 5.0 Lollipop operating system. All the three handsets house 8 GB of inbuilt storage which is expandable up to 32 GB via microSD card.

All the three handsets are identically priced at Rs. 6,999. Registrations for Xiaomi Redmi 2 will begin on Flipkart from 12th March 2015 at 6.00 PM and it will go on sale starting 24th March. Lenovo A6000 and Moto E (2nd Gen) can be grabbed through flash sales on Flipkart.

All the three budget smartphone carry the same price tag of Rs. 6,999. If we keep the price point aside, looking at the specs sheet, Moto (Gen 2) disappoints a bit on camera resolution and also lacks 4G LTE support but at the same time it surprises us with bigger battery and Android 5.0 Lollipop operating system. Redmi 2 and Lenovo A6000 share identical specs in several departments except for display and battery. Competition thus, looks fierce with all the three low cost smartphones with decent specs contesting with each other.

Which phone among Xiaomi Redmi 2 vs Lenovo A6000 vs Moto E (Gen 2) do you think is better? Share your thoughts with us in the comments below.