Google has finally launched the new version of its Pixel smartphones. Highlights of the new Pixel 3 series includes Snapdragon 845 SoC, 4GB RAM, and dual selfie cameras. Additionally, a Pixel Stand allows you to use your smartphone while wireless charging. The search engine giant also launched the Google Home Hub and the Pixel Slate. Read more to find about Google Pixel 3, Pixel 3 XL Price in India, Specifications, and Features 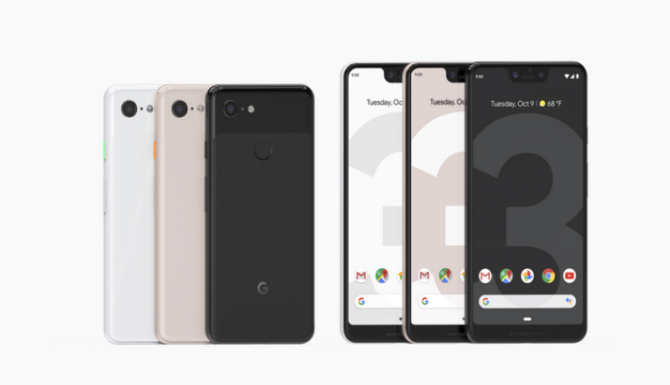 The new handsets will be available from November 1 via both online and offline stores. Pre-orders start from October 11. Both smartphones ship with a 3.5mm to USB Type-C adaptor and Pixel USB Type-C earbuds. Color options include Clearly White, Just Black, and ‘Not Pink.’

As part of launch offers, the Pixel 3 will be available at no-cost EMIs (starting from Rs 3,944 per month). Flipkart is also offering 50 percent buyback value if you upgrade to a new Pixel device within 12 months of purchase. Additional offers include Rs 5,000 off on purchases via HDFC credit and debit cards, extra Rs. 4,000 off on exchange, and no-cost EMIs up to 18 months.

The new handset is backed by a 2,915mAh battery that offers up to 7 hours of usage with 15 minutes of charge. It comes with support for fast charging and Qi wireless charging support (with the Pixel Stand). The Pixel 3 XL is backed by a 3,430mAh battery.

Google has also introduced a ‘Night Sight’ feature for low-lighting conditions. A ‘Photobooth’ feature takes shots of smiling subjects. Google claims that the new ‘Top Shot’ feature allows the new cameras can capture ‘the best shot on the first try.’

The search engine giant has also added a new Google Assistant feature called ‘Call Screen.’ The AI-powered feature answers the phone for you. It asks who’s calling and why, and then transcribes the conversation and shows it on screen.

Additionally, the Pixel 3 smartphones feature a Pixel Visual Core chip for the cameras. Apart from 64GB and 128GB internal storage options, the new handsets come with unlimited online storage for photos and videos.

Both handsets (single-SIM) run Android 9.0 Pie operating system and comes with Digital Wellbeing features. You can now just flip your smartphone face down to turn on Do Not Disturb with the new ‘Shhh’ gesture. The Digital Wellbeing Dashboard shows how much time you spend on different apps and allows you to set timers. A new Playground feature allows you to put stickers and captions on images. It comes with ‘Playmoji’ characters that react based on users’ facial expressions.

Both the Pixel 3 and Pixel 3 Xl come with an Active Edge sensor and a Pixel Imprint fingerprint sensor. The company is also touting ‘advanced x-haptics for a sharper/ defined response.’ Additional sensors on the devices include an accelerometer, ambient light sensor, barometer, gyroscope, magnetometer, and proximity sensor.

Both Pixel 3 and Pixel 3 XL sport an aluminum frame with hybrid coating and feature ‘soft-touch’ Gorilla Glass 5 on the back. Both devices come with an IP68 rating (water and dust resistant).

In terms of dimensions, the Pixel 3 measures 68.2 x 145.6 x 7.9mm and weigh 148 grams. The Pixel 3 XL measures 76.7 x 158.0 x 7.9mm and weighs 184 grams. Apart from wireless charging, the Pixel Stand can also turn the smartphones into a digital frame that displays your favorite albums from Google Photos while it charges.

What do you think of specs and price of the new handsets? Which of the Pixel 3 devices will you go for? Share your thoughts with us in the comments section below.