Honor launched its 4C smartphone in the Indian market earlier this  month. The handset was launched alongside Honor Bee smartphone and Honor power bank. The Honor 4C is priced at Rs. 8,999 and is available to buy from Flipkart.com. It will compete with the likes of Lenovo A7000 and Yu Yureka which carry the same price tag.

If you are going to buy a smartphone and are confused between these three devices, check out this post to pick the best one. Read on to find out how Honor 4C vs Lenovo A7000 vs Yu Yureka compare with each other in terms of specifications and features. 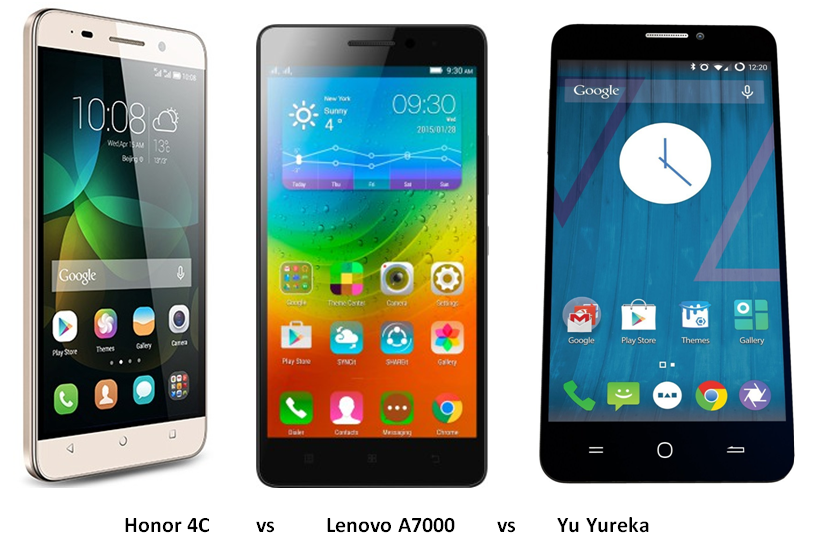 Features and Specifications Comparison: Honor 4C vs Lenovo A7000 vs Yu Yureka

All the three handsets are equipped with an octa-core processor paired with 2GB of RAM but they differ in SoC’s. The Honor 4C is powered by octa core HiSilicon Kirin 620 SoC clocked at 1.2GHz, Lenovo A7000 with MediaTek (MT6572M) clocked at 1.5GHz and the Yu Yureka packs a Qualcomm Snapdragon 615 SoC clocked at 1.5GHz.

Honor 4C and Lenovo A7000 house 8GB of inbuilt storage as compared to 16GB inbuilt storage of Yu Yureka. All these three rivals support expandability up to 32GB via microSD card.

On connectivity front, besides dual-SIM, Wi-Fi and Bluetooth options, Lenovo A7000 and Yu Yureka offer 4G LTE support which the Honor 4C misses out.

This round again is a tie since the price tag of all these devices is Rs. 8,999.

The Lenovo A7000 phone boasts of its Dolby Atmos sound and is touted as the world’s first smartphone to be equipped with this technology.

Since these three handsets carry the same price tag and also their specifications are closely matched, it completely depends on buyer’s requirement what feature is required and which feature can be compromised. Lenovo A7000 and Yu Yureka pack larger displays. Yu Yureka comes with more inbuilt memory. Lenovo A7000 boasts of its Dolby Atmos sound and runs Android 5.0 Lollipop OS with Vibe UI. The Honor 4C misses out on 4G LTE support and packs either same or inferior specs as compared to its rivals.

Which handset among Honor 4C vs Lenovo A7000 vs Yu Yureka do you think is better? Share your views with us in the comments below!