Huawei is all set to launch a new flagship device this month. Now, a new leak has revealed the design and features of the upcoming smartphone. The Huawei Mate 10 Pro is expected to be launched in four variants – 6GB RAM/64GB internal storage, 6GB RAM/128GB storage, 6GB RAM/256GB storage, and 8GB RAM/256GB storage. As we move towards the launch date, the Chinese company is steadily building hype around the handset. Read more to find about Huawei Mate 10 Pro Price in India, Specifications, and Features 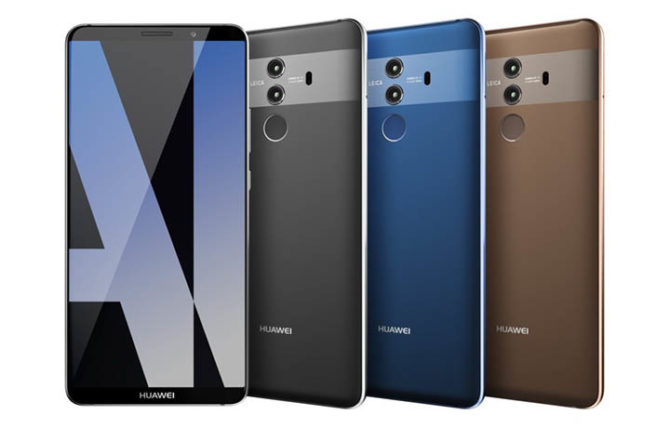 The Huawei Mate 10 Pro is set to be launched on October 16. The high-end smartphone is expected cost over $1,000. The company is also expected to launch Mate 10 and Mate 10 Lite at the same event.

The new details were leaked on the social media by the popular tipster Evan Blass (@evleaks). According to new leaks, the Huawei Mate 10 Pro will sport a dual camera setup (horizontally placed) by Leica. It will combine a 12MP and 20MP sensors (both with f/1.6 aperture). An 8-megapixel camera is placed on the front.

The Mate 10 Pro will be powered by the company’s latest Kirin 970 processor. The new handset will feature a 6.0-inch bezel-less ‘EntireView’ display (similar to Samsung Galaxy Note 8 and the LG V30) with QHD (1440×2880 pixels) resolution and 18:9 aspect ratio. Huawei has confirmed that it will be backed by a 4,000mAh battery. The Chinese handset maker shared a teaser video with a tagline – ‘That feeling when your battery lasts all day on a single charge.’

The upcoming Huawei Mate 10 Pro is tipped to sport a standard biometric authentication via fingerprint scanner. It is said to run Android 8.0 Oreo operating system with EMUI 6.0. The much-anticipated Mate 10 Pro has been leaked in a live image. It comes in three color options – Dark Blue, Black, and Brown. Other features include an IP68 rating (dust and water resistance) and Cat. 16 LTE modem.

Huawei is pitting its flagship smartphone against the Apple iPhone. The company has been teasing the smartphone giant on social media. The new smartphone is expected to bring AI capability. Huawei is claiming that the upcoming flagship will be an ‘intelligent machine.’ We will have to wait and see if it is worth the hype. Are you excited about the new Huawei Mate 10 Pro? Let us know in the comments section below.