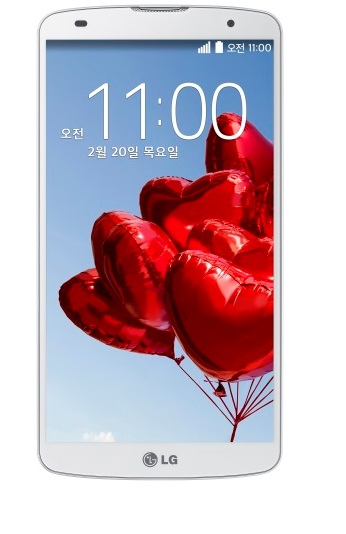 The new high-end device form LG will compete with Samsung Galaxy S5 and Apple’s new iPhone that are going to launch this year. It has 5.9-inch full HD large display and it is just 8.3mm think with weight 172 grams. The LG reduces the size of bezels too around display so  that it will not be too bulky while handling. The 5.9-inch display has 1920*1080pixel resolution.

There is a quad core processor from Qualcomm Snapdragon clocking at speed of 2.26GHz. For better graphics it has Adreno 330 GPU too along with 3GB huge RAM on board, this device will be surely a good performer and will able to handle heavy multitasking and applications. Another good thing is, it runs on latest Android 4.4 KitKat operating system.

The 13-megapixel camera at back can record videos at 120fps speed. The main camera also support 4K Ultra HD video recording, that’s rare on devices today. There is a 2.1-megapixel camera too at front for video calling.

On connectivity front, it has LTE support. And it comes with latest Bluetooth 4.0, Wi-Fi and NFC. LG G Pro 2 comes in Titan, White and Silver colors. And it will be launched in Mobile World Congress this year. It has huge 3200mAh battery.

“Knock Code is an example of LG bringing simpler, more convenient solutions to consumers’ mobile lives,” said Dr. Jong-seok Park, president and CEO of LG Electronics Mobile Communications Company. “Whereas in the early years of smartphones it was a contest to see how many features could be stuffed into the phones, our researchers took a long, hard look at how consumers were really using their devices in their daily lives and included just the most useful UX features. We think customers will agree.”