Micromax has come a long way since its first started operating in India and the Canvas series has been the one that has garnered a lot of attention in the budget smartphone arena. We already have a lot of devices in the Canvas range and a new device is all set to join the ranks. The picture of the upcoming Canvas device, the Micromax Canvas A92 has just leaked on to the interweb courtesy the twitter user, @MMXNewscaster.

The Canvas A92 in the pictures sports a big screen with 3 capacitive buttons at the bottom. It is expected to come with a ‘Lite’ moniker, thus suggesting towards the fact that the device will be a budget version of the popular Canvas A110 (Video review here). It will sit above the Canvas A88 and below the A110. It is expected to come with a dual core processor like all other budget devices and will run on Android 4.1 Jelly Bean most probably. 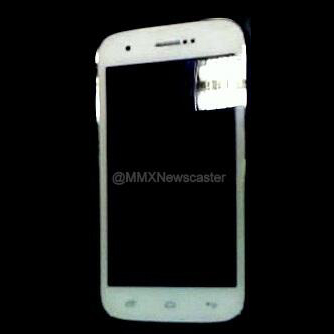 The Indian manufacturer wants to go on with its rule of launching a new Canvas device every 2 months but seeing the way it has been going, that is soon becoming the launch of a new Canvas device every month. The company has been feeling the heat from the launches taking place in the budget arena from other manufacturers but it wants to keep the buzz around its devices going. Who would have thought that one day, the Micromax devices would be subject to leaks before launch.